The Combo Cannon (known as Main Cannon #2 in Kirby Super Star Ultra and also referred to as the twin cannon in Kirby Super Star) is the primary weapon of the Battleship Halberd, located on the ship's main deck. It consists of three distinct pieces; a large rotating turret which fires volleys similar to a Shotzo's, a lower turret which shoots a powerful laser, and a robotic arm which can grab intruders and drop bombs on them. In most of its appearances in the Kirby series, this cannon is fought as a boss or Mid-Boss, but it has seen other uses as well.

The Combo Cannon is fought as a Boss in Chapter 4 of Revenge of Meta Knight and in The Arena. Kirby can attack and disable the lower cannon, but the Combo Cannon can only be defeated by striking its main rotating turret. Doing this can be tricky - especially with no Copy Ability - but the robotic arm which occasionally tries to grab Kirby may also drop bombs, which can be swallowed for the Bomb ability, and the cannonballs can be swallowed for the Yo-Yo ability.

The Combo Cannon as seen in Kirby's Epic Yarn

In the bonus Dream Land stage Battleship Halberd, the Combo Cannon is faced as a Mid-Boss during the course. Kirby and Prince Fluff can engage it by using the Star Shooter transformation.

While not directly seen in use, this cannon is used as the Halberd's primary weapon against Star Dream, where it fires rapid volleys at the rampaging computer. This is supplemented by the Planet Buster, which is an attack that Kirby contributes to. 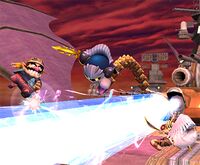 The Combo Cannon firing on the fighters in the Halberd stage of Super Smash Bros. Brawl

In The Subspace Emissary, the Combo Cannon is seen a number of times in use on the Halberd, primarily when the Subspace Army is attempting to repulse Star Fox's Arwing attacks.

On the Halberd stage, the Combo Cannon is the main stage hazard present once fighters land on the Halberd's deck. It can fire its laser cannon and large volleys at the fighters, and may also try to strike them with the robotic arm.

The Combo Cannon also appears as a collectible trophy.

The Combo Cannon appears as a collectible trophy.

Given the return of the Halberd stage in both of these titles, the Combo Cannon appears as a hazard once again, functioning the same way as before.