This article is about the Copy Ability. For the item, see Mike (item).

Mike is a Copy Ability that allows Kirby to defeat his opponent by shouting at them through a microphone (early games suggest that Kirby is just trying to sing when he uses the ability, but his singing is so poor that enemies are defeated through irritation or laughter). When obtaining this ability, Kirby gains a pair of red and yellow headphones with star insignia, though his hat changes while using each shout (a white baseball cap for the first, the headphones for the second, and a green spiky mohawk for the last). Typically, Kirby is allowed to use this ability up to three times, with each shout being different in character and dealing a different amount of damage (though for the vast majority of normal enemies, each shout may as well defeat them in one hit). After Kirby uses the last shout, he loses the ability. Mike can typically be obtained by swallowing Walky or Mr. Tick-Tock, though a few more obscure sources for the ability exist.

In Kirby's Dream Land and some other games, the microphone is an item that Kirby can inhale. When he spits the mike out, Kirby will shout into the microphone and defeat all enemies within range.

Kirby using Mike to defeat a group of Scarfies in Kirby: Nightmare in Dream Land.

In Kirby's Adventure and Kirby: Nightmare in Dream Land, Mike is obtained primarily from Mr. Tick-Tock, but can also be obtained by inhaling Paint Roller's painted microphone in his boss battle. It can be used three times, and each time it is used is visually different, but the effect is the same, defeating all common enemies on screen and dealing large damage to bosses and mid-bosses. 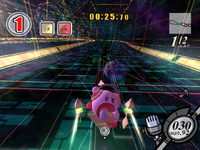 In Kirby Air Ride, Kirby can obtain the Mike ability from Walky, by collecting the Copy Panel in City Trial, or by using a Copy Chance Wheel or Mix. When he gets the ability, he automatically uses it, shouting once loudly into the desk mike to defeat nearby enemies and heavily damage and launch other racers. This is the only appearance of Mike in the games where it can only be used once.

In Top Ride, the Mike appears in item form and has the effect of stunning all racers on the track for a moment.

In Kirby's Return to Dream Land and its remake, Kirby's Return to Dream Land Deluxe, Mike returns as a limited-use ability, now gaining a regular hat that resembles the one used during the Desk Mike shout. It is once again provided by Walky. A notable difference from earlier games is that the shout now has a fixed radius — a cone in front of Kirby for the first two shouts, and a sphere surrounding him for the third — rather than covering the whole screen. In addition, Mike gains a new and more powerful variant on the third shout called "Encore", which can be activated by charging up the last shout by shaking the Wii Remote or mashing the Control Pad before releasing it. 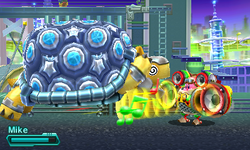 Mike returns in Kirby: Triple Deluxe and Kirby: Planet Robobot, functioning nearly identically to the way it does in Kirby's Return to Dream Land. It is still provided solely by Walky.

In Kirby: Planet Robobot, Mike can be combined with the Robobot Armor to create Mike Mode. Unlike the base ability, Mike Mode is not limited-use, and involves shooting out powerful sound waves from giant boom boxes to defeat enemies.

In Kirby and the Rainbow Curse, Mike Kirby cameos in the Music Room, but Mike is not a usable ability in the game itself.

In Kirby Star Allies, Mike retains its moveset from the previous three main-series games. It also has a new Friend Ability called Fatal Chorus where Kirby and his friends join in chorus to shout a loud chord, dealing even more damage than Stand Mike & Encore.

In Super Smash Bros. for Wii U, Mike Kirby appears as a randomly-obtained trophy.

The Mike ability appears in two (technically three) episodes of the anime series Kirby: Right Back at Ya!. The first appearance is in Abusement Park, when Kirby inadvertently eats Walky while trying to inhale a picture of a watermelon on a television screen. When Kirby has the Mike ability, he is filled with the urge to sing, which is so loud and destructive that it can destroy buildings and defeat monsters. In Abusement Park, Mike Kirby is sent through the Monster Delivery System in order to be ganged up by monsters in eNeMeE's Fortress, but his singing is so powerful that each monster is destroyed, and the N.M.E. Sales Guy is forced to send him back, where his singing then destroys Castle Dedede.

In Fitness Fiend, Kirby inhales Max Flexer's microphone after enduring his dangerous fitness routine. When he gains the Mike ability, he starts to sing again, destroying Castle Dedede for a second time and defeating Max Flexer in the process.

Mike Kirby also appears (albeit as a recording) in The Kirby Quiz, making this the last time Mike Kirby is mentioned in the anime series. 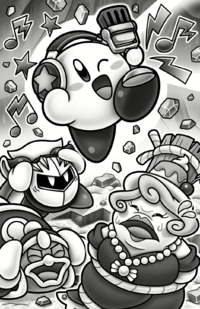 Mike Kirby sings an ear-splitting song in Kirby and the Dangerous Gourmet Mansion?!

In the Kirby novel series, the Mike ability appears in Kirby and the Dangerous Gourmet Mansion?!, where Kirby obtains it from Walky. With this Copy Ability, Kirby sings a loud and destructive song that makes an entire cave collapse.

In Kirby and the Dangerous Gourmet Mansion?!, Sir Kibble, Wheelie, and Walky lead Kirby, King Dedede, and Meta Knight into the cave they held Mrs. Parfaitski hostage in after explaining why they had done so. She is found tied to a thick post deep in the cave. When Meta Knight questions Mrs. Parfaitski about the chefs she locked away, she refuses to release them. Before the group leaves to search her mansion, Kirby comes up with an idea. Kirby inhales Walky to gain the Mike ability. He then sings his own loud, ear-splitting song about foods he likes, much to everyone's dismay. Kirby thinks they are emotionally moved by it, and continues, until he notices that the cave is collapsing. The group rushes out of the cave before it falls into a complete ruin. Mrs. Parfaitski finally gives in and agrees to free her chefs, after experiencing Kirby's horrible singing without even being able to cover her ears. Kirby does a somersault in satisfaction, dropping his Mike ability. A confused Walky is freed, and Sir Kibble remarks that Walky was lucky to miss out on Kirby's song.