Bomber is a semi-rare enemy that appears throughout the Kirby series, making his first appearance in Kirby's Adventure. His appearance looks similar to a small, purple or black bombshell with a red tip, a pair of legs and a skull icon on him to indicate the danger he poses to Kirby. In almost every one of its appearances, he walks slowly toward and edge when spotted, then proceeds to teeter on it, then drop off. If he hits the ground without being interrupted, he will explode, which can hurt Kirby from a very large distance. As such, it is imperative to deal with a Bomber whenever one is on screen. Bomber will always yield the Crash ability when swallowed. 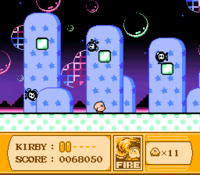 Bombers falling all around Kirby in Kirby's Adventure.

Bomber debuted in Kirby's Adventure and its remake. Here is where his general attack pattern was first established.

Bomber can be found in the following levels and stages:

Bomber appears as a common enemy in this game, and is worth 600 points when defeated. He also drops the Crash item. 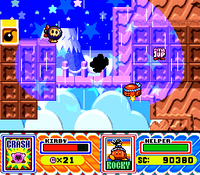 Kirby using Crash on a Bomber in Kirby Super Star.

Bomber is fairly rare in Kirby Super Star and its remake, but still behaves the same as before. Unlike most Copy Ability-providing enemies, he cannot be summoned as a Helper.

In both games, Bomber has 16 HP with 2× weakness to fire element attacks, and if he takes less than 16 damage, he will explode instead of getting safely defeated.

In Kirby Super Star Ultra, they appear in the sub-game Kirby on the Draw, where shooting them makes Kirby lose 50 points. Bomber also appears on a card in Kirby Card Swipe.

In Kirby & The Amazing Mirror, Bomber retains his appearance from Kirby: Nightmare in Dream Land. This time, he has only 1 HP, being one of the most fragile enemies in the game.

In Kirby & The Amazing Mirror, Bomber can be found in the following rooms:

In Kirby: Canvas Curse, besides in the main modes, Bombers also make an appearance in the sub-game Paint Panic, where they chase Kirby. If one of them comes too close, he blows up, which lowers Kirby's health.

In Kirby: Canvas Curse, Bomber appears in the following locations:

Bomber appears in this title, serving a more specific purpose than usual. It often appears from Yin-Yarn's magic enemy doors and will walk slowly towards a ledge, then teeter and fall, blowing up and harming Kirby and Fluff if they are in proximity. Kirby and Fluff can use the Yarn Whip to capture Bomber and transform him into a yarn bomb, which they can then throw in an arc at targets. The bomb goes off after a few seconds, and can destroy cloth blocks.

Bomber can be found in the following levels and stages in Kirby's (Extra) Epic Yarn:

Bomber returns in Kirby: Triple Deluxe. However, the Crash-yielding enemy in the main modes is Searches (like in Kirby's Return to Dream Land), and Bomber only appears in Kirby Fighters the Sub-Game, where he serves as an item. Bomber does not appear in the single-player mode.

Bomber makes an appearance in Kirby: Planet Robobot, at last appearing in the main modes. He acts much the same as he always has, and still provides the Crash ability. Like in Kirby & The Amazing Mirror, Bomber is still one of the most fragile enemies (with less than 20 HP; Jet's Store Power and Hover do 20 damage). Even a slight contact with Kirby / Meta Knight's guard will make him explode, but the player in guard won't take damage from the explosion.

In Kirby: Planet Robobot Bomber can be found in the following levels and stages:

Bomber appears in Kirby Star Allies and functions the same as in Kirby: Planet Robobot. Despite providing the Crash ability, he cannot be recruited as a Friend. If Kirby tosses a Friend Heart at him, he will simply turn into the Crash hat which Kirby can then equip.

In Kirby Star Allies Bomber can be found in the following levels and stages: 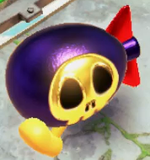 Bomber in Kirby and the Forgotten Land.

Bomber reappears as an enemy in Kirby and the Forgotten Land, with the same behavior as usual.

In Kirby and the Forgotten Land, Bomber can be found in the following stages:

Bomber appears as a collectible trophy in Super Smash Bros. for Nintendo 3DS:

Bomber appears as an item in Super Smash Bros. Ultimate. It walks slowly until interacted with or it reaches a ledge, off of which it will fall. If picked up, Bomber will be triggered to explode in 1.5 seconds, which won't damage the fighter activating it, but will deal huge damage to nearby opponents. Fighters will take less damage by moving away from the center of the explosion.

In the Kirby Fighters games, Bomber appears as an item during battles. Here, fighters can pick it up and toss it. After the toss, if Bomber collides with an enemy fighter, it will blow up immediately, dealing up to 64 points of damage and knocking the opponent away. Otherwise, it will start walking around after it hits the ground, turning around if it collides into any solid object. While walking, it cannot be picked up again, and will detonate after about 10 seconds, or sooner if it teeters and falls off a ledge. Bomber's explosion does not affect the fighter who threw it or his teammate.

Notably, unlike most other items, the Bomber will go off in the fighter's hands after a while if he does not throw it.

In Story Mode: The Destined Rivals, there are two story items which involve Bomber. The first is the Anti-Explosion Charm, which greatly reduces the damage the player's fighter takes from Bomber explosions, among others. The second is the Explosives Sticker, which makes the player's Bombers deal more damage to opponents. Additionally, there is a special stage condition which can happen referred to as "Explosive Stage", which restricts the items that appear to only Bombers and Timed Dynamite.