This article is about Meta Knight's signature sword, and should not be confused with Master.

Galaxia is the main weapon of the masked swordsman, Meta Knight, used for his occasional battles with Kirby and against other enemies. It takes the appearance of a pronged, flame-like, golden sword with a red gem on its hilt. The sword has been shown to fire crescent-shaped shots, and can also be used as a melee weapon, much like an ordinary sword.

The name "Galaxia" first appeared in Kirby: Right Back at Ya!. Since then, many games have shown Meta Knight's sword to resemble the one from the anime, indicating that it is the same sword. While Super Smash Bros. Brawl called the sword Galaxia, Kirby's Epic Yarn indicated that Galaxia is the name of his sword in the main Kirby series, as there is a furniture item called the Galaxia Sword on the Battleship Halberd stage.

Throughout the series, Meta Knight's sword has been portrayed inconsistently, as it oftentimes appears in sprites as a generic golden sword with a red hilt, and official artwork for Kirby's Adventure and Kirby Super Star also portrays it as such. It was not given a proper name in-game until Super Smash Bros. Brawl, with previous appearances referring to it as either "Master" or no name at all.

Kirby: Right Back at Ya! is where Galaxia gained its name and familiar flared design, though it appeared somewhat differently than its typical appearance. The blade would typically retract into its hilt until Meta Knight called it forth. The Super Smash Bros. series has consistently depicted Galaxia as a four-pronged, flat blade, the design of which first appeared in Kirby Air Ride.

The sword has previously been shown with six prongs, which can be seen in official artwork starting in Kirby: Nightmare in Dream Land; the four-pronged Air Ride design has been used consistently since Kirby's Return to Dream Land. In games prior to Kirby Star Allies, the blade is flat across its width, but starting in said game, the blade's width comes to a peak.

Besides being used for melee purposes, Galaxia also has elemental powers. In Kirby: Squeak Squad, Galaxia can create an electrical charge around its owner and unleash fiery shots, and in Kirby Star Allies, it can also be imbued with different elemental powers from other player attacks. As shown in Kirby: Planet Robobot's Meta Knightmare Returns, Galaxia is also capable of destroying large objects, especially objects and enemies that can be destroyed or defeated using the Robobot Armor.

Dark Meta Knight wields a silver sword with a blue gem on its hilt that resembles Galaxia. In reference to its previous design, Dark Meta Knight's variation of Galaxia consistently has six prongs and a flattened blade.

In Kirby's Adventure, Meta Knight fights with a generic golden sword as the boss of Orange Ocean. In Kirby: Nightmare in Dream Land, this particular sword now takes the appearance of Galaxia in official artwork.

Kirby and the Amazing Mirror[edit]

In Kirby and the Amazing Mirror, Meta Knight's sword is known as Master, which is a Last Battle Ability that is used by Kirby against Dark Mind, the true mastermind of the game. It is strongly implied that this sword is Galaxia, especially through the pause screen for Master, although it is not explicitly named as such and uses a different shape, possibly due to sprite style limitations. While Meta Knight's official artwork shows him wielding Galaxia, the official artwork for Master shows the sword with no prongs and a blue-green hilt, likely based on its in-game appearance.

Kirby Air Ride is the first game to portray Galaxia with its current appearance in actual gameplay. It is wielded by Meta Knight and can be used like the Sword ability.

In promotional artwork, it is confirmed that Galaxia is used by Meta Knight in his appearance in Kirby: Squeak Squad. Meta Knight uses it to fight much like its previous appearances, and it is also capable of using elemental powers, such as creating an electrical charge around the masked swordsman and unleashing fiery, crescent-shaped shots.

For the first time in the Kirby series, Galaxia appears with its proper name as a furniture item in Kirby's Epic Yarn and its remake. The furniture piece, named the Galaxia Sword, depicts Galaxia rested upon a wooden stand. It can be obtained early in the Battleship Halberd stage.

A yarn replica of Galaxia appears in the patch animation for the Battleship Halberd stage. It swipes across the clouds to clear them for the Halberd to come into view and for Kirby to access the stage.

Meta Knight does not use Galaxia during his boss fight, instead using a series of yarn-based swords of differing colors. He also does not actually appear to be using Galaxia for Slash & Bead in Kirby's Extra Epic Yarn, despite the description implying as such. 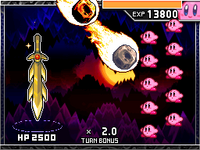 In Kirby Mass Attack, Galaxia appears as a secret boss in Chapter 4 of the sub-game Kirby Quest. If the player does not miss a single attack for the first eight battles of the chapter (and if they have beaten the chapter before), Meta Knight is replaced with an oversized Galaxia as the boss for stage 39. Galaxia has 2,500 health and, once defeated, grants Kirby the ability to perform an Excellent attack in which he wields the sword. The attack deals 9,999 damage, and thus is capable of instantly defeating any enemy or boss in Kirby Quest.

Missing any attack against Galaxia causes it to disappear, ending the battle.

In Kirby's Return to Dream Land, Meta Knight uses Galaxia in his moveset. A large Galaxia is one of the various swords Kirby may use in the Ultra Sword Super Ability.

When Meta Knight was first mechanized into the cyborg warrior Mecha Knight in Kirby: Planet Robobot, his Galaxia is replaced with a more powerful variant made out of lasers. Later on, in the fight against Star Dream, Meta Knight inserts Galaxia into a slot on the Halberd, and pulls it like a lever to release Kirby and the Robobot Armor to drill through Star Dream's defenses for one last time.

In Meta Knightmare Returns, Meta Knight uses Galaxia on his adventures, much like his previous playable appearances. Notably, Galaxia is also able to destroy objects and enemies that are normally only able to be destroyed with the Robobot Armor. Meta Knight can also perform Galaxia Darkness, his Final Smash from Super Smash Bros Brawl and Super Smash Bros. for Nintendo 3DS / Wii U.

In Kirby Fighters 2's Story Mode: The Destined Rivals, Meta Knight uses Galaxia when attacking alongside King Dedede in their tag-team duo fight. When Meta Knight is unlocked as a playable fighter after completing Chapter 4 of Story Mode, he uses Galaxia much like he did in his previous playable appearances.

In the anime series Kirby: Right Back at Ya!, Galaxia is Meta Knight's signature sword, and an ancient relic of great power. Galaxia appears prominently in the episodes Hour of the WolfWrath and Crusade for the Blade. In the latter episode, Galaxia is told by Kabu to have been forged thousands of years ago by Photron — the king of the Fire People — and imbued with a life of its own, but it was later stolen by the monster Kirisakin in order to safeguard it for eNeMeE. In order to recover this sword, the Star Warriors Meta Knight and Garlude (the mother of Sirica) fought Kirisakin to reclaim it, but Garlude ended up having to sacrifice her own life to toss the sword to Meta Knight, who among them was the only one who could wield it.

Galaxia is described as being so powerful that it could decide the fate of the universe, so Meta Knight takes extra care to ensure it does not end up in the hands of Night Mare Enterprises. The sword has the power to reject those it deems unworthy who try to wield it by shocking them with electricity. Though Meta Knight is described by Galaxia itself as the chosen one, it is clear that its true potential can only be unlocked when it is wielded by Kirby. Using this sword as a proper Copy Ability, Kirby gains the power to toss devastating Sword Beam attacks which can cleave in two even N.M.E.'s most formidable monsters.

In Crusade for the Blade, Galaxia directly speaks to Sirica, indicating that it is sentient. It has a deep male voice in the Japanese version of the anime, and a female voice in the English dub.