The Demon Frog is a small monster frog that appears in the Kirby: Right Back at Ya! episode Frog Wild. It possesses Kirby and uses him to cause destruction in Cappy Town and then Castle Dedede until King Dedede takes the Demon Frog for himself and turns into the monster Devil King Dedede. A helpless Kirby is beat upon by him until the previously ordered Heavy Anaconda arrives. It swallows King Dedede after the Demon Frog loses control over him which results in the Demon Frog's defeat, as it is also swallowed by the Heavy Anaconda in the process.

The Demon Frog is a small green creature with a pale underbody which almost exactly resembles that of a true frog, except for a few extra qualities: its bulbous eyes are orange with light purple outlining, and it sports a purple star mark above its nose. It also bears two bat wings on its back, though it never shows any signs of flight capabilities.

The Demon Frog is capable of possessing any victim who it attaches itself unto, turning them into a monster by sinking into them. Its small size also allows it to possess whoever it desires unnoticed. In the Japanese version, Customer Service explains that it increases its victim's malice by one million-fold, which results in their monster-like form and behavior. 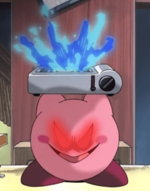 Once the Demon Frog secretly possesses Kirby, he is transformed into the monstrous Devil Kirby[Japanese title]. His eyes glow red and curve upwards, and his mouth extends across his face in an evil smile. He gives out an evil laugh upon occasion, and he also later on gains two bat wings on his back which resemble those of the Demon Frog's.

Unlike Devil King Dedede, Devil Kirby does not look significantly different from his usual self until he gains his evil face and wings, and is defined by his desire to cause mayhem and destruction. He shows no regret destroying most of Cappy Town, and has no struggle at all dealing with the Waddle Dees of Castle Dedede. Due to Kirby's kind and heroic nature, the Demon Frog is unable to fully integrate itself into him, which allows Tiff to break the frog's hold on Kirby by calling out to him.

After King Dedede reclaims the Demon Frog, he uses it on himself to become the monster Devil King Dedede[Japanese title], and becomes an enlarged brawny version of his original self. His eyes glow red and curve, just as Devil Kirby's, and he gains six large sharp teeth. He bears two bat wing marks on his chest, and he wears his now torn robes around his large arms.

Devil King Dedede is very large and burly, which allows him to shake and crack the ground with a single stomp. Along with himself, his mallet also grows in size, however, he is never able to cause damage with it. Once the Heavy Anaconda arrives, the Demon Frog is given a fright and King Dedede is shrunk back to his original self. 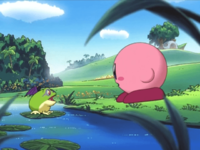 Kirby meets with the Demon Frog moments before it possesses him.