A Miracle Fruit is an object that debuted in Kirby: Triple Deluxe. It grants the Hypernova ability when inhaled or touched.

The plant that bears the Miracle Fruit is first seen as a small vine stemming from the ground, which is part of the Dreamstalk. Upon being approached by Kirby, it rapidly grows, then bears the fruit. The fruit itself is a pulsating elliptical crimson-colored berry with an inner turquoise and outer gold peel swirling around it, and a visible glowing indigo aura.

Miracle Fruits also play key roles in two boss fights in Kirby: Triple Deluxe. Firstly, as Kirby is fighting Flowered Sectonia, he is captured and presumably finished when Taranza and King Dedede come to his rescue and toss him a Miracle Fruit. Secondly, in The True Arena, Queen Sectonia transforms into Soul of Sectonia by eating four Miracle Fruits prior to the true final boss fight. 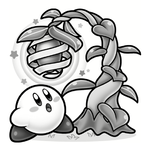 Illustration of Kirby beside the Miracle Fruit

In the second volume of the Kirby novel series, Kirby and the Big Panic in Gloomy Woods!, Miracle Fruits appear growing in the Gloomy Woods, alongside the rumored Stardust Fruit, which everyone is after instead. The fruit and plant it grows upon appears mostly identical to its original game appearance.

King Dedede firstly discovers one and bites into it, mistaking it for the Stardust Fruit, but it has no effect on him. Later on however, Kirby inhales another in an attempt to regain his strength while in a desperate situation, and its powerful effects quickly shoot through him. This allows him to use a Hypernova inhale, in the same fashion as in Kirby: Triple Deluxe, which he uses to bring down an aircraft at the brink of escaping into his gaping mouth. The ability immediately disappears after the puffball spits what's left of the aircraft back out.