Star Dream (sometimes called the Mother Computer) is a Boss fought in Kirby: Planet Robobot, appearing as the boss of Mind in the Program, and serving as the final boss of the main Story Mode. It is a sentient computer built by a long-lost civilization, and re-purposed by the Haltmann Works Company to fuel its operations.

Star Dream is largely mechanical in nature, taking the form of a large tube-shaped machine with a large singular eye and numerous frills and surface features which do not have a clear function. Star Dream's main shaft is shaped somewhat like a screw, and sports a pattern that resembles a heart on the front, and many of its attacks are also heart-shaped. However, these hearts also show a crack through the middle, which may serve as a sign of the computer's defective nature. It sports a single cycloptic eye which it uses to stare unblinkingly at whatever its attention is drawn toward; said eye is curved inwards, giving it the illusion of staring at the player. Star Dream appears to be a relative of Galactic Nova from Kirby Super Star, as its final form resembles it greatly.

When in its full form, Star Dream rivals Galactic Nova as the largest boss in the Kirby series, though its actual presented size varies depending on the circumstances. When in its initial form, Star Dream ranges from being able to fit inside the Access Ark comfortably, to being approximately the size of the Halberd during the first battle. When controlling the Access Ark, it is significantly smaller in the actual battle than it ought to be, considering that the ark is typically portrayed as equivalent in size to all of Popstar.

While mentioned a few times throughout the story, Star Dream is not properly introduced until President Haltmann shows it to Kirby at the end of Access Ark. It is said to be the source of the company's power, and was responsible for all of the mechanizing technology they had been using, including changing Meta Knight into Mecha Knight. Indeed, Haltmann uses the computer to build himself a mech to battle Kirby with.

After Haltmann is defeated, he attempts to use Star Dream again to exact revenge, and is in the process of activating it with a controller helmet, but his executive assistant, Susie, steals it off his head. As controlling the computer requires direct brain access, this causes Haltmann to black out, as Susie proclaims that she was waiting for an opportunity to steal Star Dream for herself. However, when Susie dons the helmet, the computer activates on its own, and zaps Susie away as well. The computer, using Haltmann's body to communicate, declares that all organic life is flawed, and that it would erase history in order to usher in a new age of 'infinite prosperity'. It then rises out of the Access Ark and into space, away from anyone who could interfere.

With Susie's begrudging help, and Meta Knight's Halberd, Kirby pursues Star Dream into space, where he fights the computer in the grand finale. Upon defeat, Star Dream, and everything it created, vaporizes, leaving Popstar in peace once again.

The following lists all of Star Dream's attacks in Kirby: Planet Robobot. Each phase is represented with a separate bar of health. Attack names are taken from Japanese guidebooks. 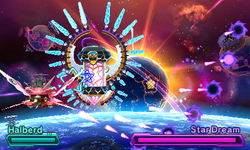 Star Dream throws a massive number of lasers in Phase 1 of the fight.

Once Phase 1 concludes, Star Dream returns to Pop Star and abducts the entire central dome of the mothership, adding to its mass and returning to the fight. 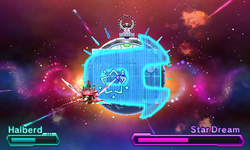 Star Dream fires an "A" at the Halberd

Once Phase 2 concludes, the remaining front covering of the dome falls off to reveal a face on the dome, looking much like the one on Galactic Nova. The fight resumes, with new and bizarre attacks. 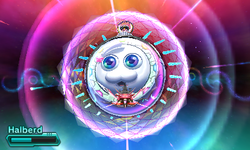 Star Dream at the start of Phase 3.

Once Phase 3 concludes, Star Dream falls for a moment, but then shoots a surprise laser to cripple the Halberd. Meta Knight releases Kirby from its face, to deal the final blow to Star Dream with the Robobot Armor by itself. 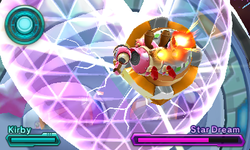 Kirby drilling through Star Dream's shields in Phase 4 of the fight.

All that needs to be done during this phase is for the player to continue rotating the Circle Pad as quickly as possible. This will allow Kirby to drill through all the shields, then unscrew Star Dream from its base.

On defeat, Star Dream explodes, fragmenting into countless pieces, which then all vaporize, along with everything else that was built by Haltmann Works. Pop Star is saved, and the game is complete.

In The Arena, Phase 4 is not fought, and defeating Phase 3 completes the boss rush. 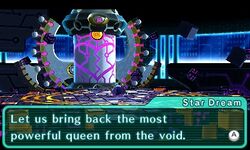 Screenshot of one of Star Dream's lines of dialogue in Meta Knightmare Returns.

In Meta Knightmare Returns the extra game, Star Dream appears during the fight with President Haltmann 2.0. After the president is defeated, the computer addresses Meta Knight directly, proclaiming him to be the new admin. It then proceeds to set up a challenge titled "Sword_Master.EXE" for its new admin, having him fight three distinct bosses in succession in order to prove his worth as a swordsman. The first two are clones of familiar bosses created by the computer, Dark Matter Clone and Sectonia Clone.

After these two are destroyed, Star Dream then proceeds to summon one last foe for Meta Knight. Through a cosmic rift, Galacta Knight is brought in. Immediately after being summoned, he slashes Star Dream, presumably destroying it, and engages Meta Knight with new and improved powers. After defeat, Galacta Knight is re-sealed in his crystal prison, and sent back from whence he came, completing this game mode.

In The True Arena of Planet Robobot, a what-if scenario, Kirby fights the same 2.0 bosses Meta Knight has faced. Galacta Knight slashes Star Dream again like in Meta Knightmare Returns. After Galacta Knight is defeated by Kirby, however, there is still one boss left, displayed as ???? in the rest area.

When Kirby enters the door to the final battle, it is revealed as none other than Star Dream. It still has Galacta Knight's slash mark on it, but now has a dark red palette. It is titled Star Dream Soul OS, serving as the Soul Boss of this game.