The N.M.E. Sales Guy[1] is the public face of Night Mare Enterprises and a recurring secondary villain in the anime series Kirby: Right Back at Ya!. He is usually seen only on a television screen from within Castle Dedede, appearing whenever King Dedede wants to order a monster or other product from the company. The N.M.E. Sales Guy is a humanoid figure who wears a business suit and gives off a professional demeanor. Despite this, it is clear that he wishes only to exploit King Dedede for as much money as he can, and try to defeat Kirby using N.M.E.'s monsters.

The Sales Guy is humanoid in appearance. He has a long chin and pale gray skin. His hair color is purple and green, and he wears large orange sunglasses. His suit is dark blue with a bright orange shirt and pink tie. In the very last episode of the show, Fright to the Finish, he is revealed to have short, Kirby-like feet with no legs. He is first seen fully in the episode The Pillow Case (in the Japanese version), but the fact that he is wearing a kimono and that he is on a pillow make it seem that he is sitting as opposed to standing. 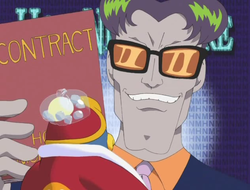 The N.M.E. Sales Guy does a good job of solidifying the evil nature of Night Mare Enterprises by using shady business tactics to keep King Dedede indebted to him and the company.

The N.M.E. Sales Guy serves as the public face of Night Mare Enterprises, and as such, tends to keep a professional demeanor as much as is possible, even when he is being directly insulted by his customers. He tends to do his job well, as he is often able to talk King Dedede into buying extra peripherals and charging him premium rates for various services. As such, he is able to keep King Dedede under a perpetual debt which is ultimately never paid off before N.M.E. is destroyed in the final episode. Despite his professional demeanor, The N.M.E. Sales Guy secretly (and sometimes not-so-secretly) mocks King Dedede for his gullibility and his foolishness, once referring to him in the flashback in The Fofa Factor as "King Sucker". Due to the King's obstinance against paying his debt, the N.M.E. Sales Guy often has to refuse him service, or send in a monster to forcefully repossess Dedede's assets.

Overall, the N.M.E. Sales Guy's main role in the show is to act as a source or information about each of the monsters that Kirby has to do battle with. Despite doing a good job at selling monsters, the N.M.E. Sales Guy tends to falter when it comes to his real ambition of destroying Kirby and the other Star Warriors. He often hatches plans to entrap the pink puffball, the most notable examples of which are plans to have Kirby transported directly to N.M.E. headquarters to be destroyed by a horde of monsters which are attempted in Abusement Park and Scare Tactics - Part II. Both times, these plans nearly work, but are thwarted due to Mike Kirby's singing in the former case, and Meta Knight in the latter. The N.M.E. Sales Guy's worst humiliation comes when he is tricked by Knuckle Joe into sending Masher to Dream Land only to have the monster destroyed when Knuckle Joe betrays him. Despite his usual role as a villain, the N.M.E. Sales Guy does have a sense of fair play. In The Kirby Quiz, he serves as an impartial host, even disqualifying King Dedede and Escargoon when it is proven that they cheated in the last round.

The N.M.E. Sales Guy appears in a majority of episodes in Kirby: Right Back at Ya!, though his role is often brief. For a full list of N.M.E. Sales Guy's episode appearances along with details of his role in each one, see his filmography page.