This article is about the limited-use Copy Ability. For the similarly-functioning item from Kirby's Block Ball, see Crash (item).

Crash is an ability primarily obtained by absorbing a warhead enemy, Bomber. It allows Kirby to perform a destructive attack, Crash Fireball, which wipes the screen clear of enemies. In Kirby's Return to Dream Land and Kirby: Triple Deluxe, the ability is obtained primarily from a floating round bomb creature called a Searches.

The Crash ability does not produce a Helper due to two key reasons:

Crash first appears in Kirby's Adventure. It reappears and functions identically in its remake. It can be acquired from the regular enemy Bomber and from the defeated Poppy Bros. Sr. In its original incarnation in Kirby's Adventure, using the attack would have Kirby bouncing all over the screen, rather than producing a giant explosion as would be seen in later games. Using Crash instantly defeats all enemies and Mid-Bosses on-screen, but only does some damage to bosses. 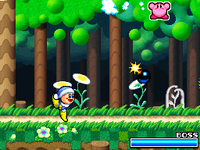 Crash reappears in Kirby Super Star and its remake, functioning identically to its appearance in Kirby's Adventure, though gaining a new animation. Like the other limited-use ability, Mike, Kirby does not gain a hat. It can be gained from Bomber, or by using Copy on Scarfy (or Mister Anglep in Kirby Super Star Ultra).

Crash appears in Kirby & The Amazing Mirror, unchanged from its appearance in Kirby: Nightmare in Dream Land. It is once again provided by Bomber.

In this game, Crash is distinguished by a black ring which orbits Kirby upon gaining the ability. It is used by tapping the touch screen and functions similarly to its appearance in the main games, and can be used to press Switches. It is once again provided by Bomber.

Crash is redesigned in Kirby's Return to Dream Land and its remake, Kirby's Return to Dream Land Deluxe. Firstly, it gains its modern hat: a crown with a glass dome that contains a nuclear reaction inside. It also gains the ability to make the explosion even more powerful (albeit only effective on bosses/mini-bosses) by charging it up beforehand. This can be done when the player holds down the B (or 1) button while mashing the +Control Pad (or shaking the Wii Remote).

Kirby releasing a Crash on Miasmoros in Kirby: Planet Robobot

The ability functions largely identically in the two 3DS games as in Kirby's Return to Dream Land, having no major changes between installments other than the removal of motion controls.

Crash reappears in Kirby Star Allies, and has a new Friend Ability performed by using the ability with friends out: Crash Rush. Additionally, the charge time for the powered-up version of the move is increased, likely to accommodate for Crash Rush.

Kirby using Crash in Kirby and the Forgotten Land.

Crash returns in Kirby and the Forgotten Land, affecting enemies in a large area around Kirby. Like in past titles, if the B Button is held long enough before attacking, Kirby can also use the Supernova attack. The ability can be evolved into Time Crash after finding the blueprint in Invasion at the House of Horrors, which not only deals damage but also slows time to a crawl for a short time, during which Kirby does additional damage to enemies by colliding with them while extending the slow-down effect.

Crash Kirby makes three appearances in the anime series Kirby: Right Back at Ya!, appearing in the episodes Fossil Fools - Part II, Air-Ride-in-Style - Part II, and Cappy Town Down. It retains its essential function in the video games, giving Kirby a single-use explosive attack that destroys all of his enemies in one fell swoop. In Fossil Fools - Part II, Kirby uses this ability to destroy Doctor Moro and his Chimera Dinosaurs. In Air-Ride-in-Style - Part II, Kirby uses the ability to destroy a Destroya. This is done again in Cappy Town Down, though it is done too late to save Cappy Town.

The anime series was the first to give Crash Kirby a hat, and it has a distinctive look from the current design used in the video games. The hat resembles a samurai helmet and is largely black with sharp white accents and a crown-like golden piece on top. Additionally, during the transformation sequence, Kirby is showered in a series of light rings which resemble the traditional symbol of an atom, alluding to the nuclear nature of this ability.