This article is about the juvenile form of Kracko, and should not be confused with Li'l Kracko.

Kracko Jr. is a boss in the Kirby series and a juvenile form of Kracko, first appearing in Kirby's Dream Land. His appearance consists of a single eye surrounded by four cloudy orbs which typically hang in place, though they can and do often spin around the central eye. Most games portray these orbs with a pink coloration to them, though Kracko Jr.'s artwork in Kirby: Canvas Curse has two pink and two light blue, complimenting the color scheme of the mature Kracko's body accents. Kracko Jr.'s attack strategy is comparable to that of Kracko, except that fewer attacks are in Kracko Jr.'s arsenal, meaning he is generally considered to be an easier version of the full-fledged Kracko. Some games, such as Kirby's Dream Land 2, have Kirby battle Kracko Jr. initially, only for him to transform into Kracko proper later in the fight.

Kracko Jr. is sometimes faced in the middle of a stage, and can thus sometimes be considered a Mid-Boss in certain circumstances, though his behavior and properties more align with a proper boss (the most notable being that he is not inhaled after defeat). In other instances, such as in Kirby & The Amazing Mirror, Kracko Jr. is not fought at all, since he immediately transforms into Kracko proper after appearing.

This table details all of Kracko Jr.'s attacks in his various appearances.

Kracko Jr. first appears as a mid-boss in Bubbly Clouds - the fourth level of the game. He attacks in a set pattern, swooping around and dropping bombs. He will also drop a Waddle Doo, which is the means by which Kirby will defeat him.

In Extra Game, Kracko Jr.'s pattern is much more erratic, but strangely enough, Kirby will remain safe if he hides in the left corner. 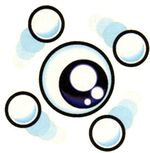 Kracko Jr. is encountered at the end of Grape Garden. He is invulnerable, and Kirby has to escape him by jumping upward, preferably using the Hi-Jump ability. When Kirby reaches the top, Kracko Jr. morphs into Kracko to begin the actual fight.

Kracko Jr. appears during the first phase of the boss fight in Kracko Land. He moves back and forth in the air, and may attack by charging at Kirby. Hitting him four times causes him to transform into Kracko, though he cannot be hit while charging forward.

Kracko Jr. is faced down in the Cloudy Park level. He spends a lot of its time beneath the cloudy floor, poking his eye out to shoot beams or Co-Krackos at Kirby. He occasionally rises fully out of the floor to drop bombs. He can also shoot his orbs at Kirby.

When Kracko Jr. is knocked out, he transforms into Kracko and the fight continues.

Kracko Jr. appears in Stage 7 in Round 4, where he can be seen patrolling the area. Hitting him four times causes him to retreat and confers 5000 points.

In the boss fight in the following round, Kracko Jr. is faced first, and transforms into Kracko after a few hits.

Kracko Jr. appears in Spring Breeze, much like he did in Kirby's Dream Land. He also appears as Kracko Jr.'s Revenge in Revenge of the King, tougher than before. He now drops five bombs instead of three, he spawns a Waddle Doo less often, and he moves noticeably faster than before. He can also fly in a circle motion from the edge of the arena.

Kracko Jr. makes a very brief appearance in this game. He floats down from the sky in Mustard Mountain and transforms almost immediately into Kracko proper before the boss fight begins. As such, Kracko Jr. is not fought in this game.

Kracko Jr. appears in the Block Attack boss game in Kirby: Canvas Curse as the final obstacle when playing in Level 1. Kracko Jr. does not have much means to fight Kirby in this incarnation, and only moves around the room he is found in. To defeat him, Kirby must avoid his cloud orbs and crash into his eye four times.

Kracko Jr. appears as an enemy in the Kirby Mass Attack Sub-Game Strato Patrol EOS, prior to the battle with Kracko proper. Interestingly, in this game, he has three orbs instead of four.

In this spin-off title, Kracko Jr. serves as the boss of Level 2, and his Revenge variant serves as the Boss of Level 2-EX, and appears again on Secret Path. He attacks similarly to Kracko, but is a bit milder, with less swooping, less speed, and less beams out at a time. Unlike in most games, Kracko Jr. will generate Drop Stars with his attacks instead of spawning enemies.