The Mint Leaf is an obscure Kirby series item that first appeared in Kirby's Dream Land. It lets Kirby use his Air Bullet attack in the air without falling afterwards, essentially allowing him to rapid-fire his enemies. The item's effect is a reference to real-life mint leaves giving better breath.

The item is referred to as a やきいも (Roasted Sweet Potato) in Japanese, in reference to real-life sweet potatoes often being the cause of hiccups; the reason for the name mismatch may be due to cultural differences, as the association between sweet potatoes and hiccups is not as strong outside of Japan. Regardless, the regional difference has been solidified in Kirby: Triple Deluxe onwards by making the item distinctly different in appearance between versions.

The Mint Leaf first appears in Kirby's Dream Land, and can be found within the Float Islands, Bubbly Clouds, and Mt. Dedede stages. It is most notably used during the battle against Kaboola, where it does not run out until after the battle is over. When Kirby is under the effect of the Mint Leaf item, the "Shooting" theme plays, much like when he is using the Superspicy Curry.

The Mint Leaf appears as one of the items which Kirby can eat in the bonus game for Kracko Land. When a Mint Leaf is eaten, it confers 1000 points, and has no additional effects.

In Kirby: Triple Deluxe, the Mint Leaf appears as one of the keychains, resembling its original sprite from Kirby's Dream Land.

In the Kirby Fighters games, the Mint Leaf returns as an offensive item with a similar function, appearing at random during most battles. Notably, it now clearly resembles a sweet potato in the Japanese version and an actual mint leaf in international versions. After picking up this item, instead of puffing manually, the fighter shoots out Air Bullets automatically, pausing briefly after five puffs, with each bullet dealing 10 damage for the first hit and 5 thereafter. After firing 20 of these bullets (or enough time passes), the fighter puffs out one last giant Air Bullet which deals 24 damage. If the player holds the B button while under the effect of the Mint Leaf, the current direction they are facing will be locked, allowing them to move backwards while firing.

In Story Mode: The Destined Rivals, there is a story item called the Mint Leaf Sticker, which doubles the attack power of the Air Bullets the player's fighter fires after picking up a Mint Leaf.

While the Mint Leaf does not appear directly in Kirby's Dream Buffet, it is depicted as a Character Treat, using its sprite from Kirby's Dream Land. 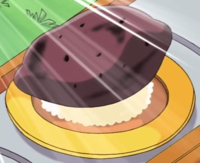 In Kirby: Right Back at Ya!, it appears in the episode Dedede's Raw Deal, in its original form as a roasted sweet potato. However, its hiccuping powers come as a hindrance rather than a help to Kirby this time around. In the episode, Kirby eats it off of a sushi revolver. He is then attacked by an overgrown Squishy, and his inhaling powers are prevented by the hiccups that result from eating the sweet potato. As such, he starts off on the losing side of the battle. However, Tiff scares his wits out by saying he'll starve if his hiccups don't cease, which makes Kirby (who is known for his gluttonous nature) jump in fear and release his hiccups.