Wheelie is a reoccurring enemy who takes the form of a sentient black wheel about the same size as Kirby with a a large, reptilian eye in its center. First appearing in Kirby's Adventure, Wheelie is the most common provider of the Wheel Copy Ability, and serves as the ability's helper in Kirby Super Star and its remake. Uniquely, in this role as a helper, Wheelie can pair up with Kirby to form the Wheelie Rider ability combo.

In early games, particularly sprite-based ones, Wheelie had a simpler design, consisting of only a black tire with the eye in the middle. Following its appearance as a helper in Kirby Super Star, however, it would increasingly be portrayed with the red cover, engine, handlebars, and a seat. There is also a larger version of Wheelie known as Grand Wheelie which serves as a mid-boss. Other variants of Wheelie include the Wheelie Bike, Wheelie Scooter, and Rex Wheelie Air Ride Machines from Kirby Air Ride, and the Blaze Wheelie vehicle from Kirby Battle Royale. 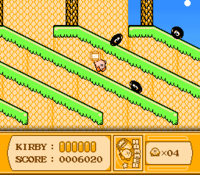 Kirby contending with a bunch of Wheelies in Kirby's Adventure.

Wheelie can be found in the following levels and stages: 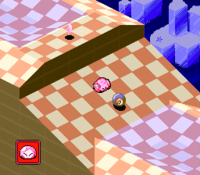 Stone Kirby sliding toward a Wheelie in Kirby's Dream Course.

Wheelie makes an appearance in Kirby's Dream Course as a standard enemy upon the course. Wheelie holds position, and grants the Wheel ability when collided with.

In Kirby's Dream Course, Wheelie can be found in the following courses and holes:

Wheelie appears as a common enemy which is worth 600 points on defeat. It drops a Block Flip item. 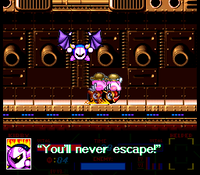 In Kirby Super Star, Kirby is automatically given a Wheelie to ride for the final escape sequence of Revenge of Meta Knight, giving Wheelie the most prominent role it's ever had.

In Kirby Super Star and Kirby Super Star Ultra, Kirby is able to ride Wheelies, as well as have them as helpers. When befriended as a Helper, instead of changing palette like other enemies, it gains a "saddle" and exhaust pipes reminiscent of a motorbike. In the Revenge of Meta Knight sub-game, Kirby is required to ride one of these helper Wheelies in order to complete the game. 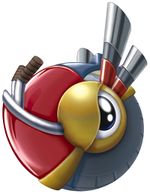 The Wheelie Bike is one of many Air Ride Machines in Kirby Air Ride based on Wheelie.

Wheelies appear as common enemies in this game, can can be seen riding along various tracks in Air Ride mode, as well as appearing in Kirby Melee. They grant Kirby the Wheel ability when swallowed, though this only lasts a short time. In this game, enemy Wheelies use the Helper motorbike design.

In Kirby Air Ride, Wheelie can be found in the following places:

Wheelie appears in both of these games, taking on its look and function from Kirby: Nightmare in Dream Land.

In Kirby: Squeak Squad, Wheelie can be possessed by Ghost Kirby, whereupon it can be made to ride forward, acting much the same as Wheel Kirby would.

In Kirby & The Amazing Mirror, Wheelie can be found in every major area of the Mirror World except for Moonlight Mansion and Cabbage Cavern.

In Kirby: Squeak Squad, Wheelie is a relatively rare enemy, only appearing in a few stages. However, one stage in particular (Secret Sea - Stage 5) is notable in that it only features a single Wheelie as an enemy, whereas no other stage does that with any other enemy. Wheelie can be found in the following levels and stages: 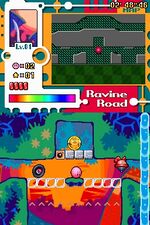 Kirby nearby a Wheelie in Kirby: Canvas Curse.

Wheelie appears in Kirby: Canvas Curse, with similar form and function as in previous games. Although its speed is concerning, Wheelie can be easily stopped by tapping it with the Nintendo DS stylus to stun it.

In Kirby: Canvas Curse, Wheelie appears in the following locations:

While not appearing in the main game, Wheelie cameos in Kirby Quest in one of Kirby's attacks. Wheelie also appears as an enemy in Kirby's Brawlball when fighting Heavy Lobster.

A Wheelie from Kirby: Triple Deluxe.

Wheelie returns in Kirby: Triple Deluxe and grants the Wheel ability once again when swallowed. As in Air Ride, enemy Wheelies use the motorbike design, which carries over to Planet Robobot.

Wheelies also appear in two randomly-obtained Keychains. One is on its own depicting its sprite from Kirby: Squeak Squad. The other is paired up with Kirby as Wheelie Rider from Kirby Super Star.

In Kirby: Triple Deluxe Wheelie can be found in the following levels and stages:

Wheelies appear again in this title, though the Grand Wheelie does not. In addition to providing the Wheel ability as usual, they also appear out of ducts to grant the Robobot Armor with the Wheel Mode in the appropriate stages.

In Kirby: Planet Robobot Wheelie can be found in the following levels and stages:

A special variety of ride-able Wheelie appears in the Attack Riders game mode. Known as Blaze Wheelie, this Wheelie is extra large and takes on the color of its rider's team. It can perform a burst attack which knocks opponents away.

Wheelie appears as a collectible trophy.

Wheelie appears as a collectible trophy.

Wheelie appears as a monster in the Kirby: Right Back at Ya! episode Born to Be Mild - Part II. The character Fang transforms into this monster as a last resort to try and finish the race against Kirby and Gus. In the anime, Wheelie is much larger than its in-game incarnation, but its powers and appearance are largely the same.

Wheelie attacks by trying to ram into its targets on the road. Unlike most other monsters, Wheelie is not defeated by Kirby directly, but rather defeated by falling into the traps that King Dedede set on the racetrack to get Kirby. These traps cause Wheelie to crash into the walls of the raceway stadium repeatedly, causing the whole arena to collapse with Wheelie inside it.

Wheelie, as seen in Kirby and the Dangerous Gourmet Mansion?!

In the Kirby novel series, Wheelie is the primary source of Kirby's Wheel ability. He is described to have unmatched speed, and he takes great pride in this. Wheelie is depicted with a timid personality, and is a subordinate of King Dedede who fears the king's wrath.

Wheelie appears as a secondary character in Kirby and the Dangerous Gourmet Mansion?!, where he is one of the three thieves who kidnaps Mrs. Parfaitski, with the other two being Sir Kibble and Walky. Wheelie is the first one to be caught by Kirby, King Dedede, and Meta Knight. He is first seen as a shadowy figure with a hood and black cape. King Dedede tears the hood and cape off, and forces Wheelie to tell them where Mrs. Parfaitski is. He tells them that she was taken to a cave in a forest. The three heroes then notice that Meta Knight's airship was sabotaged, and believe that Wheelie was responsible. Kirby then inhales Wheelie to gain the Wheel ability, and pulls the airship with a rope. When the group later fights Sir Kibble, Kirby releases Wheelie by dropping the Wheel ability so he can inhale Sir Kibble. After this, the three force Wheelie to lead them to the cave where Mrs. Parfaitski is. When Walky shows up with his painfully loud voice, Wheelie silences him and requests that Kirby releases Sir Kibble. Wheelie and Sir Kibble then explain that they kidnapped Mrs. Parfaitski because she was cruel to her chefs and locked them up due to her picky and unnecessary dissatisfaction with their food. The group then heads to where an angry Mrs. Parfaitski is tied up. Kirby inhales Walky to gain the Mike ability and sing an ear-splitting song, much to everyone's displeasure. This causes the cave to eventually collapse, and the group rushes out. With Mrs. Parfaitski finally giving in, the group returns to her mansion to free the locked away chefs.

Wheelie also makes a brief, unillustrated cameo in Kirby Meets the Squeak Squad!. When Kirby, King Dedede, and Waddle Dee take the egg back to the temple, Kirby is pulling the cart with the Wheel ability. Meta Knight, who is spying on them with Daroach, comments that Kirby copied it from Wheelie, one of King Dedede's subordinates. When the three finally reach the temple, Kirby drops his ability, and Wheelie heads back to Castle Dedede, having finished his work.