Kirby's Dream Land is a side-scrolling platformer title, and follows suit from other such video games of the age, with a few key differences. The game - and its titular protagonist - are designed with beginners in mind. Instead of restricting the player to a single jump and limited attacks, Kirby is able to hover indefinitely in the air to get over bottomless pits and other hazards. He is also fairly hardy, able to take several hits before being defeated, whereas most other platformers would have the character defeated in one or two hits. Kirby is also equipped with his trusty inhale, which allows him to simply eat most of the enemies on his path, and spit them out to defeat other enemies. As such, Kirby's Dream Land is easy to complete, with only five levels and relatively easy boss fights interspersed, but a hidden bonus version of the game lets players go through again against tougher enemies.

Kirby's Dream Land takes place in the land of Dream Land, where all the people live happy lives. One day, a band of thieves, led by King Dedede, swoops down from Mt. Dedede and steals all the food from the land, as well as the Sparkling Stars from the sky. Kirby cannot stand for this and heads to Mt. Dedede to retrieve the stolen goods and save Dream Land.

Kirby travels through five areas of Dream Land to reach King Dedede. At the end of each land, Kirby must do battle with one of King Dedede's top goons, in the form of a Boss, who will drop one of the Sparkling Stars upon defeat. After defeating Dedede and collecting the last of these stars, Kirby uses them to inflate into a giant hot air balloon, and carry Dedede's castle all across the land, showering the stolen food back onto the kingdom. That done, Kirby returns to normal size and lands on a podium, to be cheered by the denizens of Dream Land, who look an awful lot like him.

Kirby's Dream Land is a two-dimensional platforming game set in the whimsical fantasy realm of Dream Land. The player controls Kirby and must successfully complete each stage by getting this spry round fellow to the end - avoiding attacks from enemies before losing all of his vitality points to them - and defeating the boss at the end of each stage. To accomplish this, Kirby has a fair amount of abilities at his disposal; able to walk, fly, and let out an Air Bullet or use a Dive Attack to defeat nearby opponents. Kirby can also use his signature inhale to dispose of enemies and objects, though he cannot fly while something is in his mouth.

By inhaling an enemy or object, Kirby can either spit them back out as a Star Bullet to defeat other enemies and destroy obstacles, or Kirby can swallow the inhaled object to remove it from the equation. However, when swallowing an enemy, Kirby does not gain any new ability, as his trademark Copy Ability would not be part of his toolkit until the next game: Kirby's Adventure. Kirby's Dream Land also features a score, which increases by defeating enemies, or even just breaking Star Blocks. Like many other video games, the score has no direct effect on the gameplay, nor is it saved in any sort of high-score table.

The player can reset the game by pressing A, B, START, and SELECT at the same time.

There are items that assist Kirby during his adventure. Some of these items enhance Kirby's attacks, allowing Kirby to destroy enemies, while others act as recovery items. In some cases, an item is required to defeat a boss or continue through a stage.

Different types of enemies are encountered throughout the game, all of which will harm Kirby if he touches them. Most adversaries can be defeated by spitting something at them, which adds a set amount of point to Kirby's score. Alternatively, many may also be inhaled and swallowed, or used as ammunition; however, doing so only awards Kirby half the amount of points. Most enemies respawn once their starting position is scrolled off the screen.

In the Extra Game, many opponents are replaced by faster or stronger ones. The columns "Normal Game" and "Extra Game" in the following table indicate whether or not an enemy appears in that game mode; if it is absent from a mode, its replacement is listed.

*This enemy is worth 600 points while holding a Parasol.

In Green Greens, Castle Lololo, and Bubbly Clouds, Kirby encounters a Mid-Boss which must be defeated in order to move on. All Mid-Bosses have three points of health; their current health is displayed in place of Kirby's score during the fight. Unlike regular enemies, none of them are replaced in the Extra Game; instead, the battles with them become more difficult.

Bosses are strong opponents faced at the end of every stage. Like Mid-Bosses, they possess a health meter that replaces the score display during the battle and become stronger in the Extra Game. In the Mt. Dedede stage, all of the bosses previously encountered in the game must be defeated a second time to enable Kirby to fight King Dedede.

Configuration Mode showing options to change Kirby's starting lives and health, as well as a sound test. The instructions to Config Mode is told by the game after completing the Extra Game.

Kirby's Dream Land features other game modes that allow for a change in the game's difficulty.

Extra Game is a mode in which all enemies become more challenging. For example, Waddle Dees move faster, and gain the ability to jump. In addition, normal enemies usually deal double damage. Some enemies are replaced with new, more aggressive enemies. This mode can be enabled at any time by pressing Up, Select, and A while on the title screen, though the code isn't revealed until clearing the main game once.

If the player holds down the buttons B + Down + Select on the title screen, the Configuration Menu opens, where Kirby's total HP (between one and six) or amount of lives he can carry (between one and nine) can be adjusted. This allows for adjustments to the game's difficulty, making it possible, for instance, to play a game where only one hit results in a Game Over. The Sound Test is also accessible from this menu. The code is revealed after clearing the Extra Game and can be entered at any time on the title screen before or after the fact.

The following is a list of staff who have worked on Kirby's Dream Land:

In addition, the credits list "sunday rain" as a programmer as well as "Bubby" and "Cipher" in "Special Thanks". It is unknown who they really are.

Most subsequent Kirby games utilize the music and motifs established in this title, most notably the Green Greens theme and King Dedede's Theme. The following are more specific references that have been made by later Kirby games: 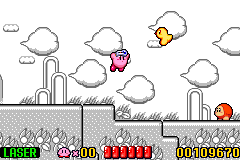 Stage 6 of Rainbow Resort is inspired from Kirby's Dream Land

Stage 6 of Rainbow Resort is based on Kirby's Dream Land, complete with a grayscale environment and the original Green Greens theme. In Kirby's Adventure, enemies, items, and the heads-up display are depicted in grayscale as well.

Main article: Revenge of the King

Exclusive to Kirby Super Star Ultra, the game mode Revenge of the King also takes cues from both Spring Breeze and Kirby's Dream Land. Specifically, it pays homage to the Extra Game in the latter by including enemies like Koozer, Flotzo, and Blatzy in place of their normal counterparts and features five stages with souped-up versions of the original Kirby's Dream Land bosses (including Kabula).

A portion of the unfurled tapestry from Lollipop Land, which depicts Green Greens.

In Stage 2 of Lollipop Land, a tapestry can be found that - when unfurled - depicts the original Green Greens stage from this game in its original monochrome sprite-based look.

In addition, another tapestry can be found in the last extra stage of Kirby: Triple Deluxe - Royal Road - Stage 8 EX - which depicts Kirby and King Dedede battling in Bubbly Clouds using the same classic style.

The downloadable title based on Kirby 3D Rumble is in many ways an homage to Kirby's Dream Land, featuring stage elements and Bosses from the game.

For example, the five main levels are based on the five stages of Kirby's Dream Land and use their musical themes. Bosses such as Lololo & Lalala and Kracko Jr. appear at the end of stages. The Sparkling Stars also appear at the end during the fights with King Dedede.

In addition, Kirby uses no Copy Abilities in this game, relying almost exclusively on his Inhale to dispatch enemies.

This monochrome area in Kirby Star Allies is meant to call back memories of Green Greens in Kirby's Dream Land.

The last extra stage in Kirby Star Allies - Extra Planet δ - features a section at the end which is displayed in monochrome and resembles the Green Greens stage in Kirby's Dream Land, including the "IN" side area. The original Green Greens theme plays here as well.

In addition, when completing Soul Melter EX difficulty in The Ultimate Choice, a Dream Button appears on the main menu which allows the player to change Kirby's look to make him resemble his original artwork from Kirby's Dream Land.

References outside the Kirby series[edit]