Searches[Japanese title] is a hovering enemy introduced in Kirby's Return to Dream Land, which grants the Crash ability when swallowed. Their appearance is similar to a Flamer.

Searches is a disc-shaped black bomb with a yellow face consisting of only a pair of angry eyes, and four red bumpy extrusions, one on each side. It hovers in place and waits for an intruder to enter its proximity. Then it lights its fuse, turning red and, if not stopped, detonates in a large explosion that can harm at great range. 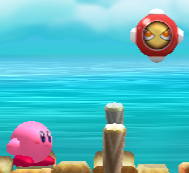 Kirby stands under a Searches that is about to explode. Not an optimal strategy.

In Kirby's Return to Dream Land Searches can be found in the following levels and stages:

In the New Challenge Stages Sub-Game, Searches is one of the enemies that can appear in courses. It is identical in look and behavior to its appearance in Kirby's Return to Dream Land.

Searches returns in Kirby: Triple Deluxe, retaining its look and function from the previous encounter. Unlike in Return to Dream Land, however, Searches is usually only found in hidden areas, specifically to provide the Crash ability for use on Mid-Bosses and other obstacles.

In Kirby: Triple Deluxe Searches can be found in the following levels and stages: