Susie (full name Susanna Patrya Haltmann[1]) is a spry magenta-haired girl who first appeared in Kirby: Planet Robobot. She is the executive assistant and presidential secretary of the Haltmann Works Company, the primary stakeholder of the company's Mechanizing Occupation Project, and the daughter of President Haltmann, who seems to have forgotten this about her. Susie is adept with machinery, able to pilot many different robotic weapons, including a personal mech referred to as her "Business Suit", and also carries a personal blaster. Her motives are not entirely clear, but it is implied that she intends to usurp the Haltmann Works Company from her father.

In Susie's debut appearance, she was a villain and antagonist to Kirby, fighting him personally as a boss and later sending other creations of Haltmann Works after him, while also being the primary source of information about the company through her expository dialogue for most of Kirby: Planet Robobot's story. She would make a truce with Kirby and his friends after the company's mother computer went haywire and attempted to end the universe. In Kirby Star Allies, she would become a playable protagonist as one of Kirby's Dream Friends, gaining her own part in Guest Star ???? Star Allies Go! and Heroes in Another Dimension. It is explained in said game that she wishes to revive the Haltmann Works Company after its destruction in Kirby: Planet Robobot.

Susie is voiced by Makiko Ohmoto, the same actress who voices Kirby in every game he's been voiced in.

Susie has two distinct profiles, with the first (left) being her on her own, and the second (right) when piloting her Business Suit.

Susie is possessed of a vaguely human body shape, though like both Magolor and Taranza before her, she has disembodied hands and a large head. Her face consists only of two large completely cyan-colored eyes and blushed cheeks, with no nose or mouth to speak of. She also has long magenta hair, held on the left side by a gold clip. Her outfit seems to consist mostly of a v-neck suit with a collar that extends all the way up past her head, and also forming a hood, with a long gray skirt below, which rounds out to a vaguely boot-shaped piece on the bottom.

Despite her appearance on the box art of Kirby: Planet Robobot, Susie cannot fly or hover. Instead, she relies on a helicopter unit (referred to as a "Transporter" in Kirby Star Allies), which she summons whenever she needs to get away. Using this transporter, she is capable of performing maneuvers and attacks similar to those of the Jet Copy Ability. However, her true potential as a fighter is revealed when she dons her "Business Suit"; a large decorated robot with a pair of arms and a drill bit in place of legs that she pilots from the top. This suit is meant to serve as an analogue to Kirby's Robobot Armor, and gives Susie a number of new attack options, including spinning arm attacks, a drill bit slam, and the ability to deploy autonomous drones.

Susie is first encountered as the boss of Overload Ocean. Kirby sees her for the first time in the boss chamber, where she introduces herself. Here, she explains that the Haltmann Works Company came to Popstar specifically to exploit its natural resources. She declares that Kirby and his friends take their resources for granted, and this justifies her and her company in doing away with them. She then declares to Kirby that he must be destroyed, and hops into her Business Suit to fight him.

Susie is seen again at the end of Gigabyte Grounds, singing praises to her boss, President Haltmann. She then brings in Mecha Knight, a subdued and mechanized Meta Knight to attack Kirby as the boss of that realm. She later releases another monstrosity to deal with Kirby at the end of Rhythm Route, a Dedede Clone.

Susie appears again at the end of Access Ark, in the Haltmann Works executive office, using an upgraded version of Mecha Knight to attack Kirby once again. When Kirby defeats him again, Susie is then dismissed by her boss, who takes over the situation from there. After he is defeated, Susie takes the opportunity to attempt to steal the Mother Computer, Star Dream from him. This fails, however, as Star Dream itself zaps her away, and then declares its intentions to erase history. Susie, begrudgingly, offers Kirby a suit of Robobot Armor and sends him after it.

When Star Dream is finally defeated, and Planet Popstar returned to normal, Susie, along with her Business Suit, depart from the planet to an unknown fate. In Kirby Star Allies, it is explained that Susie intends to rebuild the Haltmann Works Company and become its new president.

The following lists all of Susie's attacks in Kirby: Planet Robobot. 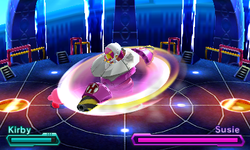 Susie tries to spin cycle Kirby in Phase 1 of the battle. 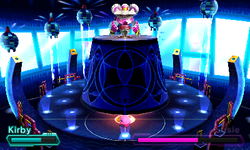 Susie detaches her mech's drones to chase Kirby in Phase 2 of the battle.

Once Susie has lost roughly two fifths of her stamina, she summons a large conical platform to rise in the middle of the room, changing the arena into a looping circular one. 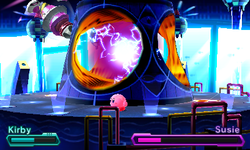 Susie crashes through the platform in Phase 3 of the battle.

When Susie's stamina is nearly depleted, she causes the central platform to open up, revealing a large red cavity in the middle. From here, she attempts to strike at Kirby through this hole.

Once Susie is defeated, her mech explodes, leaving her unarmed. She gets up calmly, brushes dust off herself, scoffs, and summons a small helicopter device to carry her away, laughing as she disappears. This leaves Kirby to do his dance, and proceed to the next level. 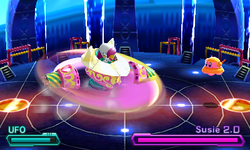 Susie 2.0 attacks Kirby with a spin. 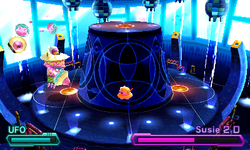 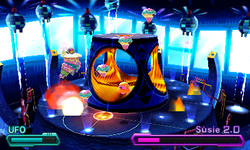 Kirby evades the many drones raining from the sky.

Like most other bosses in the game, Susie has a 2.0 variant, which is fought in Meta Knightmare Returns and The True Arena. Susie herself does not change her look at all; her Business Suit, on the other hand, now has more elaborately decorated yellow/pink patterns, and the Haltmann Works Co. logo is replaced with a heart. The back exhaust pipes are larger and more triangular, causing the suit to resemble a cat's face from the back.

Most of her attacks move at a higher speed than in her regular iteration. The following lists all of Susie 2.0's attacks in Meta Knightmare Returns and The True Arena. Note that attacks that appear in multiple phases are only listed once:

In phase 1, Susie 2.0 attacks in a fixed order on loop as follows:

In phase 2, Susie 2.0 attacks in a fixed order on loop as follows:

In phase 3, Susie 2.0 attacks in a fixed order on loop as follows:

Susie appears as a spectator in the Rocket Rumble minigame in Kirby Battle Royale. She can be found in the top left of the viewing deck.

Susie makes her playable debut as a Dream Friend in version 4.0.0 of Kirby Star Allies. Her move-set is divided between two primary forms. The first has her on-foot, where she can fire at foes using her H.W.C. blaster or charge at them with rushdown attacks similar to those of the Jet ability. To fly long distances, she pulls out her personal Transporter, which can damage foes with its rotor blades. Her second form has her jump into her Business Suit, which functions very similarly to the Robobot Armor, having only one mid-air jump and being capable of clearing away heavier obstacles such as chains, stakes and metal blocks.

Her Dream Friend description states that she intends to bring back the company her father built. In the Japanese version, direct quotes from her are given: 「科学の力で 家族だんらん、幸せな くらしを ごていきょう…」("Through the power of science, I offer family harmony and a happy life...") and 「そんな理念の もと、ヤバンなヤツは くじょ、いたしますわ！」 ("I will exterminate the uncivilized!")

Susie is capable of receiving a Power Effect such as 'Bluster', 'Splash' or 'Zap', adding to her arsenal and creating several distinct attacks which resemble the Robobot Armor modes.

The following table lists all of Susie's moves in Kirby Star Allies:

Susie also has some cameo appearances in this title:

Susie appears as a Support Spirit in Super Smash Bros. Ultimate. She is ranked ★★ Advanced, costs 1 slot and has the skill of equipping the fighter with a Beam Sword. Her Spirit Battle in Adventure Mode and Spirit Board features Isabelle possessed by her and Meta Knight in metal form, which references Isabelle being also a secretary in the Animal Crossing series and Meta Knight modified into Mecha Knight in Kirby: Planet Robobot. Susie is also one of the Spirits who can unlock the gate of the Base on the Light Realm map, possibly thanks to her technical skills.

Though not appearing directly in these games, Susie is referenced in the following titles: 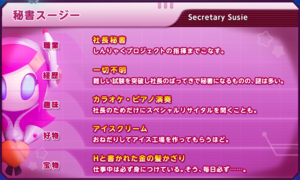 Susie’s going to show you who’s boss!
The Executive Assistant for the Haltmann Works Company has to juggle a lot of responsibilities. Susie’s in charge of scheduling meetings, screening calls, and of course, leading the plan to completely mechanize Planet Popstar.