Tuff is a young boy who serves as the tritagonist of the anime series Kirby: Right Back at Ya!. He is Tiff's younger brother and helps her to protect and guide Kirby on his road to becoming an able Star Warrior, though Tuff sometimes causes problems for the two due to his rashness and immaturity. Despite sometimes being only a minor character in the show, Tuff appears in every episode, and often serves a leading role, with notable examples being in the episodes Hail to the Chief, Flower Power, and War of the Woods.

Tuff is vaguely humanoid in appearance, with a short slightly plump physique and yellow-orange skin. His long bushy hair has green accents and covers much of his face, obscuring his eyes from view and leaving only his mouth visible. He wears a pair of purple shorts held up by a single diagonal red suspender and has greenish-brown shoes.

When compared to other characters, Tuff is somewhat taller than Kirby and the Cappy kids, but noticeably shorter than Tiff and much shorter than most of the adult characters. 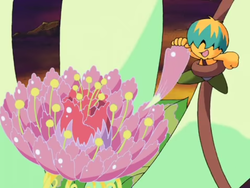 Tuff is defined by his youthful rambunctiousness, high spirit, and generally self-centered demeanor. Unlike Tiff, who enjoys studying and reading, Tuff prefers to play games and be active, with kicking around a soccer ball with Kirby and the Cappy children being his preferred past-time (though in a running gag, Tuff often accidentally kicks Kirby instead due to his similar size and shape to the ball). In addition, Tuff often likes to play pranks on others, though he usually has a higher goal with these than simply the prank itself, as seen in episodes like Escargoon Squad and Mabel Turns the Tables. Much like Tiff, Tuff is a staunch ally of Kirby and Meta Knight and is generally opposed to King Dedede and Escargoon, and will bravely step in to help Kirby wherever he can, though sometimes his stubbornness causes problems for Kirby, with the most notable example being in the episode Flower Power.

Tuff is not quite as intelligent as his sister Tiff, but he is still smart enough to catch hypocritical actions from other characters and generally does not need things spelled out for him. He still tends to fall for many of King Dedede's schemes along with the other Dream Landers, however, where Tiff and her wiser cohorts would be able to see through the ruse, though he is often the first to be snapped out of the schemes in question. Tuff's rebellious nature often leads him to commit minor misdemeanors if it means helping somebody else out in the long run, with one example being in Mumbies Madness where he breaks into Professor Curio's home and steals a book from him in order to show Tiff information about the monster Mumbies. Despite these occasional acts, Tuff sees Chief Bookem in particular as a role model, and in order to prevent him from being dismissed by King Dedede in Hail to the Chief, commits theft and vandalism in secret in order to give the chief something to do and make the townsfolk appreciate him again.

Tuff is often characterized by his boyish immaturity, with particular obsession with toys and games, his refusal to clean his room when ordered, and his refusal to adequately brush his teeth, which comes back to haunt him in A Dental Dilemma when he gets a painful cavity and initially refuses to see Doctor Yabui in fear of how much more his drilling might hurt. Tuff's immaturity is often used in tandem with King Dedede's own childish outbursts of defiance and selfishness, in order to highlight Dedede's much greater personality flaws given his more advanced age and status as king. Seeing King Dedede act in a similar and often more exaggerated way often leads Tuff to recognize his own bad behavior by proxy due to his dislike for the King.

Tuff appears in all 100 main episodes of Kirby: Right Back at Ya!, along with Kirby 3D. For a full list of his appearances and role in each one, see this page.