Cook is a Copy Ability which debuted in Kirby Super Star and later returned in Kirby & The Amazing Mirror, Kirby Super Star Ultra, and Kirby Star Allies. It allows Kirby to force all enemies and projectiles present on screen into a large golden cauldron and cook them to produce food to replenish the strength of himself and his friends. Cook is a single-use ability, typically provided by absorbing the defeated mid-boss Chef Kawasaki, and it will automatically defeat any regular enemy on screen when it is used. In Kirby Star Allies, the ability can also be used (harmlessly) on Kirby's allies, and will produce a specific food item based on what "ingredients" go in.

When Kirby gains the Cook ability, he is given a white chef's hat (with a small star on the side in Kirby Star Allies) until he finishes using the ability. Cook Kirby is misnamed as Chef Kirby in the Kirby: Triple Deluxe keychain and the Kirby's Dream Buffet Character Treat. The actual "Chef" Kirby refers to his role in the Kirby Café merchandise, which is not the same as the Copy Ability. 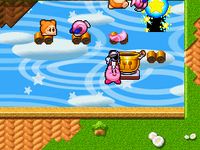 Cook was introduced in Kirby Super Star, where it is obtained from Chef Kawasaki. When the ability is activated, all other gameplay stops and an animated scene begins with Kirby conjuring a large gold colored pot. The pot pulls inside all enemies and their projectiles that are on-screen, then Kirby seasons and stirs the ingredients in the pot as the brazier underneath is lit. After a moment, Kirby will raise his arms indicating completion and a number of food items equal to the number of enemies that went in will pop out. After using the Cook ability once, Kirby returns to his regular state. 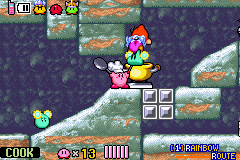 In Kirby & The Amazing Mirror, Cook is largely the same as in Kirby Super Star, but is now obtained from Cookin, being the first regular enemy in the series which provides the ability. Which food items come out of the cauldron now depend on the type of each potted enemy, as follows:

In Kirby: Triple Deluxe, Cook Kirby appears as a collectible keychain, using a sprite from Kirby Super Star Ultra. However, it is misnamed as Chef Kirby.

Cook Kirby using Supper Party, a move that has him shooting his friends out of the cooking pot as projectiles, in Kirby Star Allies

Cook returns as an ability in Kirby Star Allies. It is still a single use ability for Kirby, but now he can charge his cook attack into a powerful move hitting everything on screen called Souper Supper. One notable addition to Cook in this game is that while Kirby is cooking, he hums to himself, humming one of two different short tunes based on his charge level; the longer charge uses the classic Kirby Dance melody, though Kirby's humming is a bit off-key, as appropriate for him.

Food items from Friends and enemies[edit]

When cooked in Kirby Star Allies, each enemy, Friend and Dream Friend drops a corresponding Food item that aligns with their characteristics.

Cook does not appear as an ability in Kirby's Dream Buffet. However, "Chef" Kirby appears as a Character Treat, depicting his artwork from Kirby Super Star.

Cook Kirby is the Final Smash of Kirby in Super Smash Bros. Brawl, where nearby characters get sucked up into a pot and are cooked. After he is done, the fighters sucked in and some health restoring food are released, with the fighters being shot out after taking heavy damage. This Final Smash is not particularly good for scoring KOs, but it is a good way for Kirby to recover health while damaging his opponents at the same time. It is also possible for Kirby to produce other items from the pot besides recovery food, such as Superspicy Curry or bombs.

Kirby's Final Smash has been replaced by Ultra Sword since Super Smash Bros. for Nintendo 3DS / Wii U.

In Kirby: Right Back at Ya!, Cook Kirby makes a fairly large number of appearances, with the ability typically being obtained when Kirby inhales Chef Kawasaki's frying pan. Unlike in the games, Cook is a more fleshed-out and permanent power in the show, as Kirby gains the ability to conjure food from nothing, battle with his frying pan, make said pan grow giant to catch large monsters, and even deflect fire beams using it. Despite these additions, the ability's finishing blow still typically involves Kirby cooking his opponent into a delectable dish which, if not enjoyed by the other characters, is left as a snack for Kirby himself to gulp down.

Despite the ability's power, Cook Kirby is not always successful against his foes. The first example of Cook failing comes from the episode A Spice Odyssey, where Cook Kirby is unable to overpower the chef monster Monsieur Goan and eventually loses the ability. The second failure is against Heavy Lobster in Combat Kirby, as this robotic being cannot be cooked despite its resemblance to a culinary delicacy.