This article is about the Copy Ability in Kirby & The Amazing Mirror. For Meta Knight's sword in the anime and more recent titles, see Galaxia.

Master is a Copy Ability in Kirby & The Amazing Mirror. It is obtained by wielding Meta Knight's sword (which has not been confirmed to be Galaxia in this title) provided by him just before the final encounter with Dark Mind, and is left behind in the Central Circle after the game is completed. Master is considered the game's Last Battle Ability, but unlike most of these abilities, it is not required to clear the game and can be used at any time afterwards.

Kirby gains no hat or other costume piece when using this ability, but the sword itself glows with a strong golden light. The Master sword itself is strongly implied to be Galaxia, but is not explicitly named as such, and does not resemble the sword in shape. While Kirby gains the Master ability to battle Dark Mind at the end of the game, the use of the ability is not required to defeat him, and the ability can be lost at any time, unlike other Last Battle Abilities in the Kirby series. 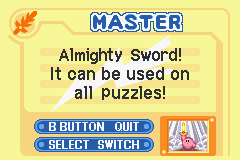 This is the Master ability's first game appearance. After Dark Meta Knight is defeated, a large vortex appears that leads to the lair of the game's final boss, Dark Mind. As the Kirbys jump into the vortex, the real Meta Knight, who is present, throws in his sword to help the Kirbys. When the Kirbys land in Dark Mind's lair, the sword is there, plunged into a pedestal in the ground. When Kirby touches the sword, he automatically gets the Master ability.

After beating the game, the ability becomes available in the Central Circle. Master is the strongest ability in the game and can solve every puzzle except for those that require Mini Kirby. Because of these factors, it is best used to reach 100% completion by searching for any secrets one may have missed before clearing the game.

The sword makes an appearance as a rare keychain, specifically in Lollipop Land - Stage 2. The item is labeled as the Master Sword.