WolfWrath is a powerful fiery wolf monster from the anime series Kirby: Right Back at Ya!. He appears in the episode Hour of the WolfWrath, where he wreaks havoc in Castle Dedede by setting the place on fire, meanwhile causing a great deal of trouble for King Dedede who had called him in, not knowing the beast's wild temperament. WolfWrath is extremely tough, able to defeat Meta Knight in single combat, and it takes the combined efforts of Sword Knight, Blade Knight, and Galaxia Kirby to bring him down.

WolfWrath resembles a wolf in general appearance, but is very large, and has crimson-colored fur. Unlike a typical wolf, he has a lighter-colored mane around his neck, spikes jutting out of his back, and a large gem embedded in his forehead. His physical agility and cries give him a very intimidating demonic appearance. WolfWrath has a wild temperament, and does not follow orders.

WolfWrath is fearsome in combat, able to strike with astonishing speed and ferocity with his claws and teeth. In addition, he is able to shoot explosive fireballs out of his mouth in rapid succession. WolfWrath is able to restore his strength using fire, and appropriately, is damaged by exposure to water. WolfWrath's other abilities include being able to see in infrared wavelengths, and paralyzing his opponents using his fangs. Unless weakened by water damage, WolfWrath is highly resistant to attacks, able to withstand even direct hits from swords.

Role in Hour of the WolfWrath[edit] 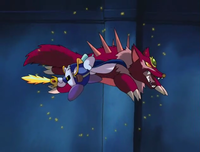 Main article: Hour of the WolfWrath

WolfWrath makes his only appearance in Hour of the WolfWrath, where he terrorizes the inhabitants of Castle Dedede for the entirety of the episode's duration, setting the castle ablaze in the process. Sword Knight and Blade Knight explain that Meta Knight had saved them from this monster many years ago, which is why they are loyal to him. Matters are complicated, however, when Meta Knight is paralyzed by WolfWrath, leaving Sword, Blade, and Kirby to deal with the monster and safeguard the court. WolfWrath proves a significant challenge for the three, but Sword and Blade manage to drag him into a pond outside the castle to weaken him, and Kirby finishes him off using a Sword Beam from the Galaxia.