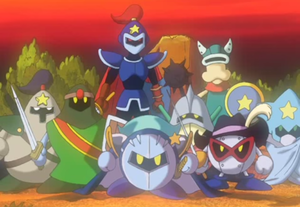 The Star Warriors (also referred to as part of the Galaxy Soldier Army) are an organization appearing in Kirby: Right Back at Ya!. They are a group of strong space-faring knight-like warriors who were said to have battled eNeMeE in a war many years before the events of the anime. However, eNeMeE's monsters outnumbered them, killing most, and turning a few notable warriors against their former allies. The few Star Warriors who remained fled to distant parts of the galaxy in order to recover what they could and await the birth and distribution of new Star Warriors throughout the cosmos to continue the battle. The term Star Warrior is typically applied to Meta Knight, who is a veteran of the old war that decimated most of his comrades, and Kirby, who is an early part of the aforementioned new generation.

Despite their central role in the larger narrative of the anime series, not much is known about the Star Warriors at large aside from details about specific members. Most of the information relating to them is given by Meta Knight and Kabu, particularly in the episodes Kirby's Duel Role, Dark and Stormy Knight, and Crusade for the Blade. Individual Star Warriors seen in flashback sequences have varying body shapes and appear to be collections of various alien species, though nearly all of them are dressed like medieval knights with appropriate weaponry and helmets which either partially or totally obscure their faces. Many of them also have yellow star-like insignia somewhere on their outfits (with Meta Knight also possessing one at some point before the main story). The only two Star Warriors who do not wear armor in this fashion are Kirby and Kit Cosmos.

New Star Warriors are said to be born out in the depths of space and incubated in personal starships until they are ready to battle monsters which their ships detect and ferry them to. Kirby in particular is borne to Dream Land in this fashion, but Meta Knight explains that he was called in prematurely, which serves as an explanation for Kirby's infantile nature. It is unclear however how Kirby ended up with his own Starship and with this distinction when taking into account Kabu's story of how Kirby was initially created by eNeMeE as a monster, but was unable to control him. Star Warriors set up bases of operation across the universe, with Kabu statues acting as sanctuaries where the warriors could recover. The Kabu in Dream Land specifically has a pedestal inside his sanctuary which can be used to repair Kirby's Warp Star.