Bugzzy is a Mid-Boss in the Kirby series, debuting in Kirby's Adventure, where he gives out the Backdrop ability. He later returns in Kirby Super Star, this time yielding the Suplex ability and also acting as its helper. Bugzzy also appears in both games' remakes, Kirby: Nightmare in Dream Land and Kirby Super Star Ultra, as well as being fought in Kirby's Avalanche.

Bugzzy also appears in Kirby Star Allies, where he can be recruited as a Friend after being defeated. Here again he represents the Suplex ability, and can perform Friend Throw.

The appearance of Bugzzy is similar to that of a stag beetle, but he has a humanoid body structure, with only four limbs and an upright posture. He wears white gloves and shoes, though in some games, his shoes match the purple color of his carapace. He has a blue thorax with two pairs of wings on his back encased in a elytra, which he can use to fly in a similar manner to Beetley and Beetle Kirby.

In battle, Bugzzy can shoot ladybugs. He can also stomp on Kirby, and toss him around. He will typically attack by either charging straight forward or jumping on Kirby from above. In Kirby Star Allies, he is also capable of lunging from the air. In games before Kirby Star Allies, Bugzzy does not drop Drop Stars when he attacks, meaning that only his ladybugs can be used against him.

Bugzzy appears in Kirby's Adventure and its remake as one of the Mid Bosses, and is the only enemy that gives the Backdrop ability. Once Kirby is in his grasp, Bugzzy will either leap forward and drive him into the ground, slam him backwards or pound him repeatedly. Bugzzy may also fly into the air and hover in pursuit of Kirby, and will ensnare him if he gets close enough. Bugzzy supplies ammunition to use against himself in the form of two Bugzzy Jrs. that he releases into the air. These ladybugs slowly flutter and home in on Kirby.

In Kirby's Avalanche, Bugzzy appears in Stage 7 as one of Kirby's opponents. Here's he is depicted as being seemingly incapable of speech, instead greeting Kirby with a loud roar. His in-game abbreviation is "BUGZ". 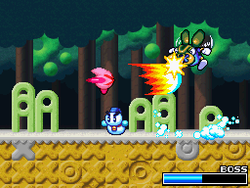 Bugzzy appears as a Mid-Boss in Kirby Super Star and its remake, Kirby Super Star Ultra. He is often fought in cave areas, and attacks by stomping and using suplex moves. In this game, Bugzzy is weak to fire-based attacks and ice-based attacks. When inhaled after being defeated, Bugzzy grants the Suplex Copy Ability. Bugzzy also appears as the Helper representing said ability.

Bugzzy is fought in Cocoa Cave during Dyna Blade, in the Garden in The Great Cave Offensive, and again in Chapter 6 of Revenge of Meta Knight. He appears on three planets during Milky Way Wishes, those being Hotbeat, Cavius, and Mekkai. Bugzzy reprises all these roles in Meta Knightmare Ultra. In The Arena, consecutive fights against Bugzzy, Bonkers, and Chef Kawasaki make up the Mid-Boss All Stars 1 battle. Bugzzy is one of the playable Helpers in Helper to Hero. He is pictured on a card in Kirby Card Swipe.

Bugzzy appears in two of Kirby Mass Attack's Sub-Games, those being Strato Patrol EOS and Kirby Quest. In the former, Bugzzy appears as a flying opponent to be shot down. In the latter, he appears in Stages 4 and 36 as an opponent with 240 HP.

Bugzzy returns in Kirby Star Allies as a mid-boss and as a recruitable ally. This marks his first appearance in 3-D, and he has been given a bit of a remodel; sporting a larger head in proportion to his body. He still provides the Suplex ability when inhaled, and reprises his role as the ability's friend. As a mid-boss, he has access to new attacks upon grabbing someone and can do a Dash Grab move in the air. A stronger version of Bugzzy also appears in later stages, with a black exoskeleton, a red belly, red eyes and purple limbs. This version can also use the Pinpoint Kick as an attack, among minor alterations to his pre-existing moves.

The following is a list of attacks Bugzzy can perform as a mid-boss in Kirby Star Allies. Italics denote variations done by his harder variation only.

Bugzzy's regular variation attacks in a fixed order on loop as follows:

After losing enough health, Bugzzy abruptly switches to this attack:

After losing enough health, Bugzzy will abruptly switch to this pattern:

Twin Bugzzy is fought in some stages and on Soul Melter EX of The Ultimate Choice and comes in two varieties. It can consist of one regular and one hard variation or two hard variations, both of which attack in a different order from each other.

In Kirby Star Allies, Bugzzy can be found in the following levels and stages:

As a Friend, Bugzzy gains access to all of Suplex Kirby's moves. In addition, he has a unique hover involving his wings, which propel him in a similar manner to the Beetle ability and allow him to cut ropes and foliage by flying through them. Lastly, he gains access to the Friend Throw ability, allowing him to toss his buddies to attack enemies and clear away heavy obstacles.

In Kirby: Right Back at Ya!, Bugzzy appears in episode 3, Kirby's Duel Role, as a monster ordered by King Dedede. Unlike the games, he towers over Kirby and attacks with hand-held weapons--first with a large sword and a notched club, then later on with two swords even greater in size. After battling with Bugzzy, Kirby defeats him by inhaling one of his swords to gain the Sword ability, then slicing him in two down the middle using Sword Beam.