Pengy (plural: Pengis[1]) is a fairly uncommon enemy in the Kirby series. Its appearance is that of a primarily blue crested penguin, with a large beak and white eyebrows (though some appearances depict Pengy without the eyebrows). It also has white streaks throughout its body. Pengy is roughly the size of Kirby, much like most other enemies. Interestingly, despite being based on penguins, Pengis cannot survive in water.

Pengis attack by using their frigid breath to encase Kirby in a block of ice. When Kirby inhales and swallows it, he receives the Ice Copy Ability. 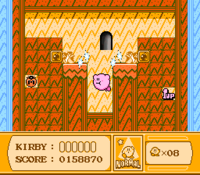 Pengy makes its debut appearance in Kirby's Adventure and also appears in the remake. It serves a similar function to Hot Head, breathing ice in place of fire, but it is also capable of moving in bursts by sliding along its belly. Before sliding, it will try to aim in Kirby's direction.

Pengy can be found in the following levels and stages:

Pengy bears a different look in Kirby's Dream Land 2 and is named Master Pengy, but otherwise serves the same purpose.

Master Pengy can be found in the following levels and stages:

Kirby sliding into a Pengy in Kirby & The Amazing Mirror.

Pengy appears in both of these games, retaining its appearance and behavior from Kirby: Nightmare in Dream Land.

When possessed by Ghost Kirby, Pengy can be made to walk, jump, and breathe ice. It cannot be made to perform its sliding move.

In Kirby & The Amazing Mirror, Pengy can be found in Mustard Mountain, Olive Ocean, Peppermint Palace, and Radish Ruins.

In Kirby: Squeak Squad, Pengy can be found in the following levels and stages:

In episode 66 of Kirby: Right Back at Ya! titled The Chill Factor, Dream Land is visited by a massive iceberg controlled by the Pengy tribe led by Pengy, who is capable of speech. Of these tribe members, only Pengy resembles the Pengis from Kirby: Nightmare in Dream Land, with his pronounced eyebrows and the ability to breathe ice. The other Pengy penguins lack eyebrows and many carry spears instead.

As the Pengy tribe moves in, Dream Land experiences a massive shift in climate, becoming notably colder as a result of their influence. Once Tiff discovers this fact and reveals it to the Cappies, Pengy and his tribe shift from friendly visitors to hostile invaders, and they proceed to take over Dream Land and subjugate its population. To try and drive them out, Kirby attempts to defeat their leader by obtaining the Ice ability, but this is ineffective. King Dedede calls upon the N.M.E. Sales Guy to send anything that can help, and is sent a super hot sauce. Instead of drinking the sauce, Kirby takes it to the Booma-Dooma Volcano and pours the sauce into the caldera, causing the volcano to erupt and counterbalance the climate, forcing the Pengy tribe to leave and find a colder place to live.