This article is about the average-sized dragon boss, and should not be confused with Freezy Rex.

Ice Dragon is a boss that debuted in Kirby's Dream Land 2. Ice Dragon is a large, rounded, cyan lizard-like creature with a white belly and four blue spikes on his back. Unlike many other dragons (such as Landia), Ice Dragon does not possess wings, but he can still flutter through the air by rapidly flapping his tail. He is an ancient life-form that has lived through a number of ages. Apart from his game appearances, Ice Dragon also appears as a monster in Kirby: Right Back at Ya!.

Ice Dragon is the boss of Iceberg, the fourth level in the game. His attack patterns consist of charging, jumping, breathing ice, and causing icicles to fall from the ceiling. He can also kick a tiny glacier at Kirby which can't be inhaled.

After his defeat, Kirby can enter the boss room again to play the Bonus Chance, which involves dodging icicles and collecting Star pieces.

In both of these titles, Ice Dragon does not appear in his regular form. Instead, he cameos as a living painting conjured by Ado (in Kirby's Dream Land 3) and Adeleine (in Kirby 64: The Crystal Shards). Both of these incarnations fight similar to his appearance in Kirby's Dream Land 2, though they are slower and easier to defeat, and also do not grant the Ice ability.

In Kirby Super Star Ultra, Ice Dragon makes a cameo appearance as a card in the Kirby Card Swipe Sub-Game.

In the Story Mode and The Arena of Kirby: Planet Robobot, Ice Dragon appears albeit as Holo-Ice Dragon, one of the holograms of the boss Holo Defense API. Despite being a hologram, Holo-Ice Dragon fights in a very faithful manner to his original battle in Kirby's Dream Land 2, retaining all of its prior attacks, but it can now spit out snowflakes.

In Meta Knightmare Ultra and The True Arena, Holo Defense API and its holograms becomes version 2.0. Holo-Ice Dragon 2.0 has a few changes in its physical appearance. Its back plates become arrow-headed, and its belly now has a pattern. Like other 2.0 bosses, its attacks become more aggressive. 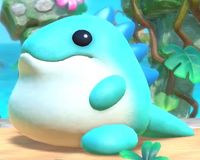 Ice Dragon makes his first proper appearance in decades in Team Kirby Clash Deluxe, and appears again in Super Kirby Clash, borrowing his essential look and behavior from his hologram from Kirby: Planet Robobot. In Team Kirby Clash Deluxe, Ice Dragon appears twice, and he appears five times in Super Kirby Clash. Among his appearances in the latter, he's fought solo in three quests and is paired with other enemies in two of them -- he can be found alongside Frost Kibble Blade to form Team Frozen Stiff, and alongside his cousin Electric Dragon and a Flame Galboros to form Team Kaiju Trio.

The following are all of Ice Dragon's attacks in Team Kirby Clash Deluxe and Super Kirby Clash:

In the pilot episode of the anime, Ice Dragon appears among the horde of Monsters invading Dream Land. Kirby inhales Ice Dragon with ease, copies the Ice ability and freezes Dark Matter, another Monster in the horde.

In Kirby: Right Back at Ya!, Ice Dragon appears in the episode Dedede's Snow Job, where it is a monster ordered by King Dedede because it is very hot in Cappy Town, which the king does not like at all. This incarnation of Ice Dragon is initially very small, but it eventually grows much larger than the one seen in the games and possesses a dark green body, a yellow belly and a long ridge of yellow spikes extending down its back. Its mouth is also shown to contain several sharp, protruding teeth, an attribute that is absent from the games.

Although its skin can withstand very low temperatures, being completely immune to Ice Kirby's attacks, the monster is still vulnerable on the inside.[1] Kirby uses this fact to his advantage by letting Chilly help him jump into the dragon's maw so he can freeze it from within. After being frozen, the Ice Dragon promptly breaks apart into shards of ice, which bury King Dedede and Escargoon as the duo stand observing what has happened to their monster. Following the dragon's defeat, all the snow and ice it has created begins to melt, restoring Cappy Town to normal.