This article is about the boss from Kirby: Canvas Curse, and should not be confused with Paintra, Claycia, or Vividria. For the theme of the same name that plays during the boss fight, see Drawcia Sorceress (theme).

Drawcia (more formally Drawcia Sorceress) is a magical and malevolent being who has the power to turn the world around her into a living painting and cast various magical spells, including taking away Kirby's hands and feet and leaving him as a ball. She is the main antagonist and final boss of Kirby: Canvas Curse, responsible for placing a curse on Dream Land and its denizens, and whom Kirby must defeat with the help of the Magical Paintbrush, which used to belong to the sorceress. Despite her immense power, her origin and motives are completely unknown.

Dressed in a heavy lavender witch's hat and cloak and with a mask covering most of her face, Drawcia's features are largely hidden behind her outfit, and that along with her long outward-spreading hair give her the appearance of the end of a giant paintbrush. She does not appear to have any limbs, with her cloak moving like the undulating of a jellyfish to propel her through the air. Only a single one of her eyes is visible, which is yellow and featureless, similar to the eyes of Meta Knight or Magolor, though another prominent glowing spot can be seen on her torso underneath her cloak, which she displays whenever she is conjuring her magical attacks. When she is defeated by Kirby, her features dissolve and congeal around this central glowing orb to form Drawcia Soul.

Since her debut in Kirby: Canvas Curse, Drawcia has only made cameo appearances in subsequent Kirby titles. However, her design influence is vast on subsequent characters, particularly her possible relatives Paintra, Claycia, and Vividria, and all of the subsequent Soul-form bosses that use Drawcia Soul's attacks.

Drawcia makes her only physical appearance in Kirby: Canvas Curse, and serves as the last boss in that game. She is also seen conjuring the other bosses that Kirby has to face along the way, though her appearance is only hinted at via her silhouette which gradually lifts until she is finally battled in The World of Drawcia. Drawcia has two known incarnations: these forms are Drawcia Sorceress and Drawcia Soul. 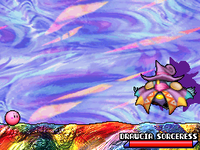 Drawcia initially faces Kirby as Drawcia Sorceress. In this form, she flies through the air and attacks using swoops and painted creatures which she summons. Drawcia can only be harmed when stunned, which can be done by deflecting her magic spheres back at her using Rainbow Lines. She can be hit up to three times when stunned in this way before resetting. Otherwise, she has a shield active which prevents Kirby and the paintbrush from affecting her.

The following table lists all of Drawcia Sorceress' attacks. Note that attack names are conjectural, with some being based off of known attack names from other bosses:

When defeated in her Sorceress form, Drawcia morphs into a giant ghostly ball of paint and continues the fight in an entirely different manner. This form seems to be her true self, and (perhaps intentionally) matches Kirby's limbless ball shape. More information about this form and fight can be found on the Drawcia Soul article.

In Kirby: Triple Deluxe, Drawcia Sorceress appears as a rare keychain. Hers can be found in Endless Explosions - Stage 3.

Drawcia figurine in Kirby and the Rainbow Curse

In Kirby and the Rainbow Curse, Drawcia appears as a special Figurine unlocked after Challenge Mode is completed. Her figurine is essentially a symbol of 100% completion for the game.

In Kirby: Planet Robobot, Drawcia appears as one of the game's rare stickers, depicting her inside a canvas. This sticker can be found in Gigabyte Grounds - Stage 2.

In both Team Kirby Clash Deluxe and Super Kirby Clash, one of the equipment sets for Beam Mage is based on Drawcia.

According to Shinya Kumazaki, Drawcia was considered as a Dream Friend for Kirby Star Allies, along with other characters such as Elline, Shadow Kirby and Galacta Knight, but ultimately wasn't chosen due to a rule that was established soon after, which excluded characters from spin-off games.[1]