a Kirby encyclopedia that anyone can edit, currently with 3,818 articles and counting! 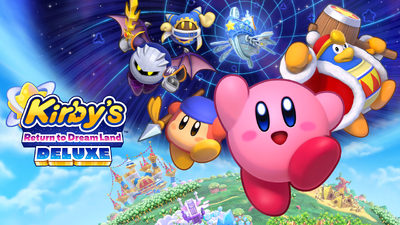 Kirby's Return to Dream Land Deluxe
will be released on February 24th, 2023! 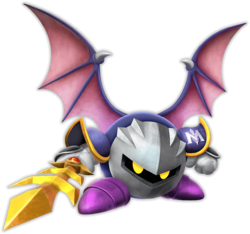 Meta Knight (occasionally formatted as Meta-Knight in older media) is a masked, winged swordsman who serves as a recurring character in the Kirby series, first appearing in Kirby's Adventure. He is a mysterious figure, and his backstory is not clearly shown in the game series. The installments he appear in usually feature him as a boss, but since Kirby: Nightmare in Dream Land, there have been instances where he is playable in alternate modes, or even teams up with Kirby directly. Though most of his schemes originate from arguably good intentions, the ways he tries to accomplish his goals are often very extreme and poorly understood by others. Meta Knight is also the leader of a band of warriors known simply as the Meta-Knights, and he owns a giant warship designed after himself, known as the Halberd.

Along with King Dedede and the Waddle Dees, Meta Knight serves as one of the most recognizable characters in the Kirby series aside from Kirby himself. Despite this fame, he was not very prevalent in the early days of the series, making his only major appearances in titles like Kirby's Adventure and Kirby Super Star (he is notably absent from any of the titles directed by Shinichi Shimomura). However, he would become much more prevalent in the series following his role in Kirby: Right Back at Ya!, becoming playable for the first time in an unlockable Extra Game in Kirby: Nightmare in Dream Land, Meta Knightmare. He would appear more regularly in the series from that point onward, and would often be playable. Meta Knight is famous for his expert swordsmanship, and combined with his unparalleled aerial mobility, he is a force to be reckoned with. He wields Galaxia, which is a powerful mythical blade in the anime series and carries some of that mystique to the main series as well.

This week's featured picture is an infamous promotional image of a Kirby plushie next to HAL Laboratory sign. It was produced in 1993 by Bandai-Namco, though the image was taken 1997.

A very important plush in the Kirby fandom with a staying power. HAL Laboratory's greatest collaboration to date. ⁠–⁠Vipz (talk · edits) 15:59, 29 May 2021 (UTC)