This article is about the dolls in Kirby: Right Back at Ya!. For the doll in Kirby's Epic Yarn and Kirby's Extra Epic Yarn, see Furniture.

The Dedede Dolls (also called Mini-D Dolls) are small hollow dolls which resemble King Dedede and appear in the Kirby: Right Back at Ya! episode Don't Bank on It. These dolls were made for King Dedede by Night Mare Enterprises as a special deal, and King Dedede is able to use them in a magic spell to hypnotize the people of Dream Land into trusting him and giving him their money to keep in a bank. Later on, however, it is revealed that if any harm comes to the dolls, King Dedede himself will be similarly harmed, and this fact comes to bite him at the end of the episode when Kirby inhales one of the dolls.

Each Dedede Doll is made to resemble King Dedede, but has featureless eyes and a slot in the mouth through which money can be deposited. The doll appears to be plush in some instances and solid in others, but in most instances is solid. The doll is roughly the same size as Kirby.

Through the dolls, King Dedede can relay his voice, and he can cast a hypnotizing spell on any who hear him through the doll in their sleep. This has the negative side-effect of forcing King Dedede to forego sleep in order to cast this spell. Additionally, King Dedede can direct the dolls to mimic his movements, and he uses this power to antagonize the people of Dream Land; particularly Kirby. However, there is a further negative side-effect which Dedede does not learn until later in the fact that any harm done to the dolls is conferred to him. As such, whenever a doll gets struck or tossed around, King Dedede receives that same punishment.

It is unclear exactly how the relationship between King Dedede and his dolls works, as he seems to need to make a conscious effort to control the dolls. By contrast, relatively minor actions done to the dolls - such as holding or rocking them - appears to have no effect on King Dedede.

Role in Don't Bank on It[edit] 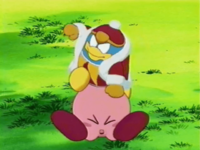 King Dedede attempts to get revenge on Kirby through his doll.

Main article: Don't Bank on It

King Dedede orders a bulk supply of Dedede Dolls in the episode Don't Bank on It in order to influence the people of Dream Land in their sleep. Every night at two-o-clock in the morning, King Dedede wakes up and delivers hypnotic suggestions and commands to his sleeping subjects. On the first night, he influences them to like and trust him, but this effect wears off quickly. On the second night, he commands them to deposit small amounts of spare change into the dolls, to convince them that the dolls brought them money. On the third day, he tells them to put all of their money into the dolls, and then influences them to deposit that money into a new bank he sets up.

However, these consecutive night-time hypnosis sessions causes King Dedede to suffer from sleep deprivation, and on the fourth night, he snaps and decides to use the dolls to attack his subjects. This rash action ends up breaking the spell he held on the people, and also leads to him realizing that he is harmed whenever the dolls are. In a panic, Dedede tries to confiscate all of the dolls before he can suffer further punishment, but one of them ends up in Kirby's hands, who plays with it and tosses it around. King Dedede tries to get revenge by swinging wildly at the air, and manages to get the doll to hit Kirby a couple of times. To retaliate, Kirby uses his inhale to eat the doll, which causes King Dedede to become stranded in Kirby's stomach dimension. It is unclear at this point how King Dedede escapes this situation later.