Chef Kawasaki, also known as Cook Kawasaki, is a Mid-Boss in the Kirby series and a character in the anime series based on it, Kirby: Right Back at Ya!. He can generally be described as a large orange egg-shaped creature with a vaguely cat-like face who wears a chef's hat and apron. In the games, he attacks Kirby by throwing plates and cutlery at him, or may try to catch him with an extending soup ladle to cook him up in his frying pan. Defeating and inhaling him grants Kirby the Cook Copy Ability.

Chef Kawasaki made his debut in Kirby Super Star and has made numerous appearances and cameos since. His most notable appearance is in Kirby Star Allies, where he became playable for the first time, able to use many attacks that Cook Kirby cannot. He also appears as an Assist Trophy in Super Smash Bros. Ultimate.

In Kirby Super Star and its enhanced remake, Kirby Super Star Ultra, Chef Kawasaki (Cook Kawasaki in the original game) is one of the Mid-Bosses fought repeatedly throughout the game. He attacks Kirby either by extending his frying pan towards him, briefly cooking and thus harming him if he manages to catch him, or by tossing either one or three plates, which can be inhaled and spat back at him. When swallowed after his defeat, Chef Kawasaki grants Kirby the rare Cook ability, and is the only enemy in the game to do so. He also appears in the minigame Samurai Kirby as the third enemy that Kirby faces. Chef Kawasaki attacks with his frying pan as Kirby attacks with a pie.

The chef makes a brief appearance in Kirby's Dream Land 3 as the operator of the mini-game in Iceberg (known as What was that sound?) that Kirby needs to win in order to acquire a Heart Star. The mini-game involves Kawasaki hitting a Gordo with his frying pan, which makes a unique sound when hit. Kirby then has to pick the Gordo that makes the exact same sound from a group of them that falls down.

Chef Kawasaki is the fifth opponent faced in the story mode of Kirby's Star Stacker for the Super Famicom.

In Kirby: Nightmare in Dream Land, Kawasaki only appears as the third opponent faced by Kirby in the Quick Draw Sub-Game, attacking with his pan.

Chef Kawasaki appears in the Sub-Game Kirby Quest, in Chapter 1 - Stage 7. He has 100 HP and drops a Maxim Tomato on the Kirbys when defeated.

Kawasaki himself does not appear in this title. In the Sub-Game Scope Shot, however, a giant robot modeled after Chef Kawasaki, named Mecha Kawasaki, is battled in Level 2. Its attacks are largely based on various food items, as well as attempting to defend with its frying pan and ladle.

Chef Kawasaki makes two appearances in this game. The first is a cameo in the 19th Secret Diary page, and the other is as a collectable figurine.

Close up from a Flagball round, showing the Chef Kawasaki illustration.

While not appearing in Kirby Battle Royale himself, an illustration of him appears in the background of Flagball, presumably advertising his food. 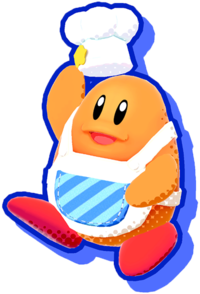 Chef Kawasaki appears in Kirby Star Allies, providing the Cook ability like before, and being recruitable as a Friend. This marks his first 3-D appearance in the series.

As a Mid-Boss, Chef Kawasaki has largely the same attack patterns he had before. However, he has been made much larger, now roughly three Kirbys tall instead of only two. Once defeated, he can be recruited as a Friend by tossing a Friend Heart at him, which will cause him to shrink considerably in size.

The following is a list of attacks that Chef Kawasaki can perform as a mid-boss in Kirby Star Allies. Attacks or notes listed in italics indicate moves or variations only performed by his tougher version. All attack names are conjectural unless otherwise stated.

His regular variation attacks in a fixed order on loop as follows:

After losing around half of his health, he will abruptly switch to this pattern:

His harder variation attacks in a fixed order on loop as follows:

After losing around half of his health, he abruptly switches to this pattern:

In some stages, Twin Kawasaki is fought and comes in two varieties. It can consist of one regular and one hard variation or two hard variations, both of which have the exact same attack order between the two of them unlike every other mid-boss twin.

As a Friend, Chef Kawasaki has an expanded move-set compared to Cook Kirby, and can use the Cook Pot and Souper Supper moves without losing the ability, though there is a cooldown timer on these moves to prevent their overuse.

Additionally in the lobbies of The Ultimate Choice, the Cook Pot and Souper Supper moves do nothing and the cooldown timer freezes to prevent further abuse.

When Kawasaki pulls out his pot, it is possible to cancel his attack before the cooking sequence starts by:

This immediately removes all enemies from the screen, but provides no food and does not cause the cooldown timer to appear.

In Kirby Star Allies, Chef Kawasaki can be found in the following levels and stages:

In Kirby's Dream Buffet, Chef Kawasaki is represented via a costume and color for Kirby to use. He also appears on a Character Treat, which uses his sprite from Kirby Super Star.

Chef Kawasaki made a minor cameo appearance as a sticker in Super Smash Bros. Brawl, which took from his artwork from Kirby Super Star. Equipping this sticker in Adventure Mode: The Subspace Emissary boosts the fighter's launch resistance. 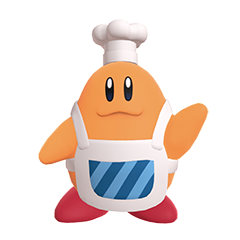 After being absent from Super Smash Bros. for Nintendo 3DS / Wii U, Chef Kawasaki makes a return in Super Smash Bros. Ultimate. Chef Kawasaki appears as a new Assist Trophy. He can throw his plateware as projectiles. He can also grab fighters with his ladle, put them into his pot and cook them, dealing them damage and producing food items in the process. Chef Kawasaki also gives the summoner a piece of food just before he disappears. Given that Kirby's Final Smash in Brawl was Cook Kirby, this can be seen as a reappearance of that move, though now on the character whom it originated from.

Chef Kawasaki also appears as a spirit that can be obtained in World of Light. He is an ace-class support spirit who causes the host fighter to gain increased stats for a while after eating food.

He is not able to be summoned on the King of Fighters Stadium, Mute City SNES and Spirit Train stages.

Artwork of Kawasaki in Kirby: Right Back at Ya!

Chef Kawasaki appears as a prominent character in Kirby: Right Back at Ya!, where he is the town cook. While generally kind and obliging, he is usually portrayed as a very bad cook and very insecure about this fact, with Kirby being the only resident of Cappy Town who likes his food. He does have many regular customers, however, as he runs the only restaurant in town.

Although Chef Kawasaki and Kirby initially get off to a rocky start in their relationship, Kawasaki eventually becomes one of Kirby's strongest allies in the kingdom, perhaps to make up for his attempt to make Kirby into a meal for his master in The Big Taste Test. Whenever Kirby needs to gain the Cook Copy Ability to fight an opponent, Chef Kawasaki tosses him his frying pan to use for the transformation.

In the English dub, Chef Kawasaki is portrayed with a lisp, substituting 's' sounds with 'th'.

In the Kirby novel series, Chef Kawasaki is the most talented chef in Dream Land, and he runs the most popular restaurant there. Here, Chef Kawasaki is depicted as a much more smart and serious character than usual. He also gets easily distressed if a heavy situation is occurring, whether it affects him or not. Steak is shown to be one of Kawasaki's master dishes. Kirby and King Dedede are huge fans of his cooking.

Chef Kawasaki's novel depiction massively contrasts his anime counterpart, where he is a master chef rather than a terrible one.

The following is a complete list of every appearance Chef Kawasaki has made in the Kirby novel series, along with the role he plays and its details in the plot of each volume:

Keychain of Chef Kawasaki from Kirby: Triple Deluxe, where he is portrayed with a thumb.