Electronic Pet is a robotic toy dog monster sent by Night Mare Enterprises to destroy Kirby after befriending him. It appears in the episode Kirby's Pet Peeve, and is the central focus of said episode. After bonding with Kirby, who had grown quite attached to it and saved it several times, the Electronic Pet ultimately fails to carry out its mission, sacrificing itself to protect Kirby instead of betraying him.

The Electronic Pet is a small toy robot dog with a rounded but segmented metallic appearance. Its main body color is a shade of tan, and its tail and ears are crimson. Over its face is a red visor shaped like ski goggle lenses, but inverted, which displays its eyes. The Electronic Pet does not have a proper mouth, instead having a rectangular screen which can open up to reveal a small drill for "chewing" food.

In addition to being able to move around like a dog, the Electronic Pet also has retractable razor-sharp claws, the ability to collect data on objects in its environment, deliver a nasty electric shock, and bust through steel bars. Despite being powered by standard consumer-grade batteries, the Electronic Pet is able to run for days uninterrupted, and is not harmed by being submerged in water. Its main feature however is its self-destruct mechanism, which was programmed to cause it to explode on Kirby when he least suspects it. 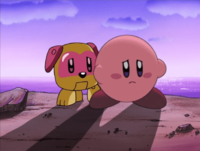 Kirby defends his pet at the cliff side.

The Electronic Pet is initially delivered to Gengu's toy shop from Night Mare Enterprises, who sells it to Sir Ebrum who wishes to give it to Kirby as a toy on Tiff's request. Kirby is not pleased with the pet at first, since he does not enjoy it following him constantly, but after a series of hardships between the two, Kirby comes to care for it deeply. The relationship is not without problems, however, as the toy makes King Dedede and the other kids intensely jealous of Kirby, and the dog has to defend itself from their encroachment.

Soon, Tiff learns where the Electronic Pet came from, and becomes concerned about what it might do to Kirby. As King Dedede pursues Kirby relentlessly to steal his dog away, Tiff tries in vain to dissuade Kirby from it. She ends up accidentally causing the dog to fall off a cliff into the ocean, and Kirby dives after it. At this moment, the dog is set to activate its self-destruct sequence to blow Kirby up, but due to the bond it made with Kirby, the dog refuses to carry out its task. Unable to stop the countdown, the Electronic Pet jumps into King Dedede's net and explodes in his face instead, sparing Kirby but leaving him with nothing but a small piece of its robot body as a memento.