This article is about the large brown snake from Frog Wild, and should not be confused with Red Viper.

The Heavy Anaconda is a large, dark brown skinned snake with rings and circles patterned down its back along with a pale belly. It has glaring pale yellow eyes, a forked red tongue, and four large fangs in its mouth. It is able to swallow large beings; specifically King Dedede. Its long body also allows it to quickly chase after Fire Kirby on the Warp Star. However, this is also its weakness, as it can easily coil itself stuck and become vulnerable to attacks. 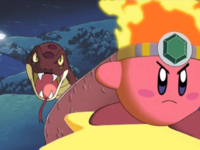 Heavy Anaconda pursues Fire Kirby up and around the tower.

After Kirby jumps onto the Warp Star. He inhales a torch thrown by Tiff and gains the Fire Copy Ability. He then spirals up and around one of Castle Dedede's towers with the Heavy Anaconda close behind. After Fire Kirby reaches the top, the Heavy Anaconda finds itself tied around the tower and therefore vulnerable. Fire Kirby launches himself inside of it and sets it ablaze, and with one last attack, he defeats the Heavy Anaconda and releases King Dedede from its gullet in the process.