New Challenge Stages is a Sub-Game which appears in Kirby's Dream Collection Special Edition, complementing the six games that were included. It is based on the Challenge Stages from Kirby's Return to Dream Land, and uses the same engine and play-style. It can be considered to be an expanded version of those stages, though it utilizes some different Copy Abilities, and also features races with Magolor. Unlike the original Challenge Stages, the stages here are organized into three distinct levels, much like stages in main-series games. In addition, the player has the option of using a Classic Controller or a Nintendo GameCube controller to play these stages, and can race against a Ghost representing their best pace after completing a stage for the first time. New Challenge Stages also features a cumulative score system which rewards various trophies at certain score thresholds, much like what would later be implemented in Dedede's Drum Dash Deluxe.

At the beginning, Magolor — one of the principal non-player characters from Kirby's Return to Dream Land — explains his whereabouts after the events of that game. To apologize for the "fuss" he caused, he has used his power to build an amusement park for Kirby to enjoy. This park consists of many different challenges that Kirby can undertake using his various Copy Abilities. At the end of each section of the park, Magolor challenges Kirby to a race through a special course. After Kirby beats him three times in three different courses, Magolor will see Kirby off, and the credits will roll.

In addition to stages styled after the Challenge Stages from Kirby's Return to Dream Land, Kirby can also finish off each level by racing against Magolor, who isn't above using dirty tricks to win.

There are three levels in New Challenge Stages, which act as hubs containing several different stages. Each challenge stage is an obstacle course, taking place in a wooden or metal toy-block environment. The goal is to make it through the course as quickly as possible, while collecting Score Coins and defeating enemies along the way. Each stage has Kirby using a specific Copy Ability (except one which Kirby must play without an ability). Kirby cannot discard or otherwise lose or change his ability while playing the course. To clear the course with a high score, Kirby is intended to utilize the specific attacks and/or movement options those abilities grant him in various ways to clear the obstacles more efficiently.

The stage is complete once Kirby makes it through the door at the end. It will end early if Kirby loses all his health, gets crushed or falls into a bottomless pit along the way, or if the timer runs out. Various bonuses can be awarded based on how well Kirby performed in the stage, and a medal will then be given based on the final score. The medal ranges from bronze, silver, gold, and then platinum, with platinum requiring a nearly flawless performance. Completing a stage also unlocks a Ghost Race for that stage, which allows Kirby to race a specter representing his current best time.

Once Kirby has completed all the standard challenge stages in a level, he can unlock the Magolor Race stage. Here, he can race Magolor through a special course, and choose any one of the abilities he used in the previous stages to do so. Fundamentally these stages aren't too different from the standard stages, but Magolor does have a nasty habit of conjuring foes to get in Kirby's way, and he can also pick up Score Coins if Kirby doesn't get them first. In the last level, there are a number of EX stages that are unlocked after the third Magolor Race is finished, which are intended as the final challenge.

The following abilities are utilized in New Challenge Stages:

The score is calculated based on the following factors:

Once the final score is calculated, a medal is awarded. The minimum points required for each medal are different for each stage, and listed in the Levels tables.

Additionally, the total score from all the stages combined is kept and displayed to the player in the level hubs, and on the save file. Reaching certain milestones will award Kirby with a special trophy. The trophies are as follows:

Once the King Trophy is obtained, the game is considered 100% complete.

The levels and stages are as follows:

Kirby is happy to see the Happiness Hall.

Happiness Hall is the first level of New Challenge Stages, containing the Sword Challenge, Parasol Challenge, and Spark Challenge. After these are cleared, the first Magolor Race is available to play, and completing that unlocks Apricot Atrium.

Kirby is pleased to discover the ripe Apricot Atrium.

Apricot Atrium is the second level of New Challenge Stages, containing the Whip Challenge, Fighter Combat Chamber, and Wing Challenge. After these are cleared, the second Magolor Race is available to play, and completing that unlocks Last Land.

Kirby enjoys his view of the Last Land hub.

The main file select menu has a chance of either playing "Ripple Star: Stage Select" from Kirby 64: The Crystal Shards or the "Helper's Rest" remix of said theme from Kirby Super Star Ultra, with the latter being more common.

Each level hub of New Challenge Stages features a music track from a different Kirby game, as follows:

The Training Room plays the original version of "The Beginner's Room" from Kirby Super Star. 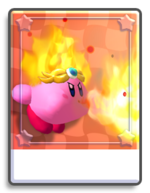 The unused select button for the Fire Ability.