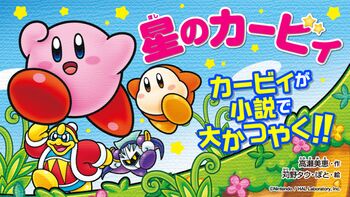 Banner featuring the main characters of the Kirby novel series.

This article is about the Japanese novel series based on the Kirby series. For the character in the series, see Kirby (novel character). For other uses of Kirby, see Kirby (disambiguation).

The books are intended for young adult readers, and as such, each volume usually consists of roughly two hundred pages, split into as few as eight to as many as fifteen chapters, not counting prologues or epilogues. A few dozen black-and-white illustrations are additionally used in each of the books to accompany specific scenes. The titles of volumes one through nine are officially localized in the Kirby Art & Style Collection book. Volumes after these are not, however, and have only been directly translated from the original Japanese titles unofficially.

Much like in the anime, Kirby: Right Back at Ya!, the series takes place in its own unique canon that does not correlate with the games. It is much more accurate to the series overall compared to the anime series, however. Many volumes in the series take inspiration from the games by including characters, objects, and storylines from particular entries, though they do not solely take from the games, as many aspects are unique to the books just the same. Some installments take aspects from other media in the overall Kirby series, such as the real-world Kirby Café, and several merchandise series, using them as a base for more fleshed out plotlines. The series stars Kirby, King Dedede, Meta Knight, and Waddle Dee as the main characters. Kirby stars as the protagonist in most volumes, while King Dedede and Meta Knight occasionally receive their own respective novels where they are the protagonist instead. Waddle Dee is the only one of the four who hasn't starred in his own novel.

Characters who deviate from these guidelines are considered minor characters, and are covered on this page.

In total, there are currently over twenty volumes in the series. These are as follows:

The following are volumes in the series which have been announced to be published in the near future: