This article is about the location. For the first game in the Kirby series, see Kirby's Dream Land.

Dream Land is a kingdom on Planet Popstar in which Kirby lives, which is typically defined by its rolling green grasslands and forests, tropical beach locales, brown stone caves, cloud-based topography, and a few castle-like structures, most notably Castle Dedede. It has been targeted by several wrongdoers, which Kirby and others are tasked with stopping. The kingdom gets its name from the peaceful sleep its residents receive, granted by the Fountain of Dreams which spreads restful dreams across the land. Part of the opening cutscene for Kirby and the Forgotten Land shows Kirby walking along a path in Dream Land.

Dream Land can be described as a particular region of Planet Popstar over which King Dedede claims sovereignty. However, it is not known exactly where the kingdom ends and the rest of Popstar begins. Despite this, it is generally understood that the topography of Dream Land consists mainly of lush meadows, forests and old castles. Kirby's House occupies one of the meadows, while Whispy Woods resides in the forest, and King Dedede makes his home in his castle atop Mt. Dedede. In addition, many cloudscapes persist above Dream Land, where Kracko and Kabula can sometimes be found. The Fountain of Dreams is located inside an area of Dream Land called Rainbow Resort.

Meta Knight and his Meta-Knights are also commonly seen in Dream Land, though it is not entirely clear if their base of operations - the Halberd - is docked there or not.

Lastly, Dream Land is home to countless numbers of Waddle Dees, Waddle Doos, and others who have varying degrees of loyalty to King Dedede.

The following lists every game where Dream Land is a setting or at least mentioned. Some games not listed here may take place in Dream Land, but this is not explicitly confirmed at any point.

Whenever something goes wrong in Dream Land, Kirby and Whispy Woods usually end up at odds with each-other.

In Kirby's Adventure and its remake, Kirby: Nightmare in Dream Land, the residents of Dream Land stop having dreams because King Dedede steals the Star Rod that lets them sleep peacefully. He then divides it into 7 parts and gives them to his underlings. Kirby eventually puts the Star Rod back together, but discovers that King Dedede actually stole the Star Rod to keep it from a villain named Nightmare, who wishes to spread bad dreams across the land. Kirby defeats Nightmare and allows Dream Land to have pleasant dreams once more.

The backstory presented in both the instruction booklet and the Japanese version tell of how the people of Dream Land fell into despair after King Dedede stole all the stars from Dream Land once again. It is unclear, however, if the courses of Kirby's Dream Course take place there or not.

The instruction booklet for Kirby's Avalanche confirms that the game takes place in Dream Land, as indicated by the presence of the Dream Fountain at the end of the adventure.

A map of the Rainbow Islands from Kirby's Dream Land 2, said to be within Dream Land.

The Rainbow Islands, where the events of Kirby's Dream Land 2 take place, are stated to be part of Dream Land within the game's manual. However, it is unclear whether they are part of the kingdom that constitutes Dream Land or an outside territory. Regardless, these islands are never seen again in the series outside of a cameo in the background of Slam Hockey in Kirby Battle Royale. 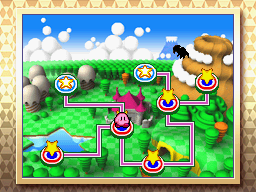 This map from Dyna Blade shows many different areas, all presumably contained within Dream Land.

Like with Kirby's Dream Land 2, it is not clear whether any of the areas Kirby visits in this adventure are in Dream Land or not.

The story mode of this game takes place in Dream Land.

At least some of the stages that take place on Pop Star are located in Dream Land.

The opening cutscene shows the Dimension Mirror floating in the skies above Dream Land, but none of the subsequent game takes place within Dream Land.

Most of Kirby: Canvas Curse takes place in Dream Land, but due to Drawcia's meddling, the land is almost unrecognizable. It is restored to normal after Drawcia is defeated.

A map of Prism Plains, an area within Dream Land, from Kirby: Squeak Squad.

Dream Land serves as the final level in Kirby's Epic Yarn and Kirby's Extra Epic Yarn. Here, it has been transformed into yarn by the evil sorcerer Yin-Yarn, a state which is only undone by the defeat of this final boss. Kirby and Prince Fluff are able to travel here to deal with Yin-Yarn once they have fully stitched Patch Land back together, thus restoring power to the wormhole-like Magic Socks.

Magolor's ship - the Lor Starcutter - crashes into Dream Land at the start of this title, prompting Kirby and his friends to help recover the lost pieces. This adventure will take them through several wide areas, though many of these may be outside of Dream Land's jurisdiction.

While the final level of the game is called "Eternal Dreamland", this is not related to the kingdom itself, and instead refers to a literal "dreamland" of endless slumber.

Dream Land in the opening cutscene in Kirby and the Rainbow Curse.

In this title, Dream Land (along with the rest of Popstar) is consumed by the 'Mechanizing Occupation Project' overseen by the Haltmann Works Company. In the process, Castle Dedede is reduced to rubble. It's up to Kirby to ward off the business-minded alien invaders and restore Dream Land to its former condition.

In this title, King Dedede sets up a giant tournament in Dream Land with a huge cake as the prize. The rest of the story mode revolves around Kirby and Bandana Waddle Dee competing for this cake against an unfair host.

The Level Hub for World of Peace - Dream Land.

The first level of Kirby Star Allies takes place in Dream Land proper. As Kirby and his star allies move through this level, they traverse verdant plains, hearty caves, and inviting woodlands. After defeating a strangely empowered Whispy Woods, the team then ventures into Castle Dedede to deal with its gluttonous king, who is gorging himself on rotten food. King Dedede himself transforms in dramatic fashion to battle the star allies, but is defeated, and later recruited into the team to find out what is going on around Popstar.

While Dream Land is not accessible in gameplay, both the opening and ending cutscenes for Kirby and the Forgotten Land take place there. 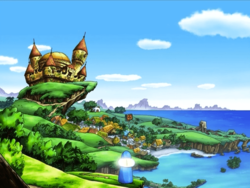 A wide view of Dream Land in Kirby: Right Back at Ya!.

In the anime series, Dream Land is the tropical kingdom which King Dedede rules over. The kingdom is largely composed of wilderness - much of which takes the form of Whispy Woods Forest - and has only one major settlement, called Cappy Town, where most of the King's subjects live. Kirby crashes into Dream Land from outer space, and is made a permanent resident when the people of Dream Land build him a house just outside of town.

While it is established that Cappy Town pays taxes into King Dedede's treasury, the town itself does not see him as a king and protector, so much as a nuisance. Instead, the town seeks guidance from an ancient stone statue called Kabu, found in a rocky valley out on the outskirts of the kingdom.