City Trial is the third and most extensive mode in Kirby Air Ride. Unlike the other two modes of Air Ride and Top Ride, it is not strictly a racing game, instead pitting up to four Kirby clones against each-other in a large open city where the goal is to power up their Air Ride Machines and then face off in a separate Stadium match using those machines once time runs out. During the match, the Kirbys can attempt to battle each other to destroy their opponents' machines or simply to steal their powerups. However, the winner is ultimately decided by whoever wins the Stadium game, which is randomly selected and could favor a Kirby with a machine which, while not objectively the best, is still the most suitable for that particular game. Like the other two modes, City Trial features its own tutorial and ending movies, scoreboards, extra modes and settings, and a Checklist which has 120 objectives to complete. 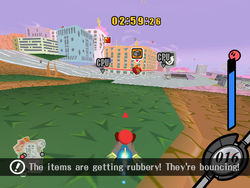 Unlike Air Ride and Top Ride, City Trial is not a racing mode by any traditional meaning of the phrase. When the game begins, the Kirbys are placed at disparate positions in a large open area and given a brief amount of time to explore. Each racer starts with a Compact Star which is not very useful for much other than smooth steering through the city streets. The objective then is to find a better vehicle to ride and/or improve the machine's various attributes with Patches that can be found either in boxes or out in the open. Additionally, many items appear which can be used against the other racers to either slow them down, steal their patches, or destroy their machines, forcing them to find another. Since switching machines is a mechanic in this mode, Kirby is able to jump off of any machine he is riding and continue on foot, though without a machine, he cannot pick up items, interact with stage elements like Super Jump Ramps, or defend himself from his opponents. During the time allotted, random events may occur within the city, which may present a hazard or opportunity to the racers, or may just be a brief inconvenience.

Once time runs out, a results screen appears showing the stats and vehicles of each racer, and then they are taken to a Stadium game (which is random by default) to compete with the machines they managed to obtain and patch up. Whoever wins this game is the overall winner, regardless of how well they did in the city prior to the stadium event. In the event that time runs out with a racer off their machine, one of two things can happen. If that Kirby had simply jumped off his machine, he will be given the same type of machine for use in the Stadium. If that Kirby had his last machine destroyed, however, he will be given a Compact Star to use instead. 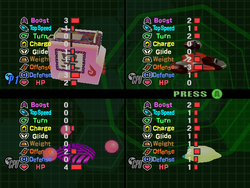 There are nine different stats which the Kirbys can enhance/drain using power-up Patches (details below). The Kirbys can also attack each-other to steal these patches and thus downgrade their opponents. These stats are as follows:

Unlike the standard racing courses, City Trial takes place in a large open area with no defined start or end point. The map itself is an island, and it is not (supposed to be) possible to venture too far from the shores. When the game begins, the competing Kirbys will be placed somewhere in or near the city center, and always above ground.

The map to the right shows an overhead view of the entire City Trial island (though underground portions are not shown here). The areas are labeled as follows (with official names listed in bold): 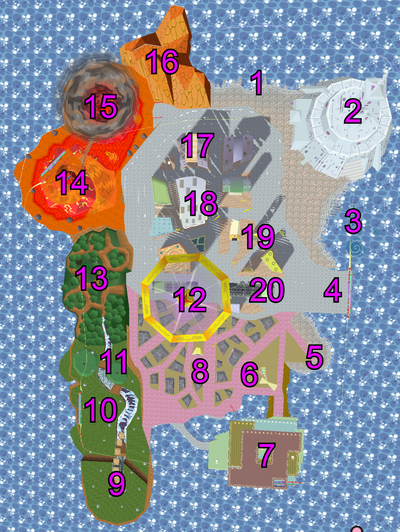 An annotated map of City Trial

*Note that the numbering on this map is arbitrary, and the specificity of locations listed could be greater or lesser.

There are a few underground passages which connect the lower part of the city center to the volcano and to the forest area. The three most prominent underground chambers are the garage located under the city center (where all the Air Ride Machines are parked in Free Run), the chamber under the forest where a number of miniature models of city buildings can be seen, and the chamber inside the volcano which is frozen over. This last chamber is connected to the rest of the underground via a small one-way rail line past frozen pillars and leads through a wall that only blocks from one side.

Additionally, the city has a number of interactive elements, including boost pads, breakable structures (like trees, rocks, coral, and the dilapidated houses to name a few), jump pads, rail lines, sky rings, a whirlpool, and two flaming dragons. Of these, only the flaming dragons can actually harm the Kirbys.

There are also a couple of small flowers which can be found in the city (though are purely decorative). One is on the volcanic cliffs, while the other is on the very top of Castle Hall.

City Trial offers a wide variety of items that the Kirbys can use to improve their machine, damage other machines, or hinder their machine. Many items can be found scattered, but breaking a specific colored box by colliding or quick-spinning into it releases specific items. The Kirbys cannot collect items if they are not riding on a machine. 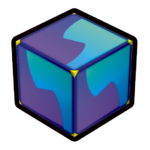 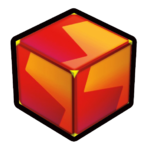 In contrast, there are a few specified areas (outside of events) where items are guaranteed to appear, though these are always blue box items. These locations are:

Unique to City Trial are two special air ride machines (referred to as Legendary Air Ride Machines) which can be assembled during regular City Trial gameplay or unlocked for unlimited use in Free Run. These machines are the Dragoon and the Hydra. Unlike other machines, they are initially found each in three pieces and are automatically acquired once one racer has all three for the corresponding machine, replacing whichever machine was being ridden preciously in a flashy cutscene. These machine parts can only be found in specific red boxes which spawn rarely in pre-determined areas. When a piece is acquired, a loud sound plays which alerts all other racers, who can then attempt to steal that piece in the same way that patches can be stolen. However, there is no guarantee (especially in shorter matches) that all three pieces for a corresponding machine will appear during a game.

To unlock the legendary Air Ride machines for use in Free Run, a certain set of Checklist objectives need to be met (outlined on the Checklist page). 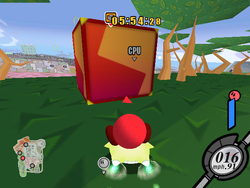 This red box is found in the area below the forest. It is guaranteed to hold a machine part.

Events, if they are turned on, can trigger at any time. These random events vary, and they can help or hinder Kirby depending on the situation. Some events indicate where it is happening, using a red arrow and noting the distance. On the map, a flashing yellow circle with an exclamation mark indicates the location of the event. Some events can grant Kirby an All-Up patch if Kirby follows the instructions in the event. In other cases, the frequency of an All-Up appearing increases in some events. All but two events indicate a siren with the sky turning into a different color when it is going to occur. All events, except two, last for a limited duration.

The following modes are available in City Trial:

Additionally, the following rules can be set for the main City Trial mode:

Like the other two modes, City Trial has a Checklist, which can unlock certain features as objectives are met.

City Trial's ending is different from the other two modes in the game, as it features a cutscene showing all the Air Ride Machines in action, and no credits. Like the other endings, 100 boxes in the checklist must be filled to unlock it.