This article is about the racing game released on GameCube in 2003. For information on the canceled Nintendo 64 precursor, see Kirby's Air Ride (Nintendo 64). For a related sub-game from Kirby: Nightmare in Dream Land, see Kirby's Air Grind.

Kirby Air Ride is a spin-off title released for the Nintendo GameCube, being the only Kirby game released for that system. It is a multiplayer racing game that takes place in full 3-D environments, involving one or more Kirbys riding various means of transportation - from Warpstars to Wheelie Bikes - through colorful and abstract courses. Using only the Control Stick and the A button, the player can guide Kirby both on the ground and in the air with a surprisingly complex number of maneuvers to master, in addition to making use of Kirby's signature inhale and Copy Ability to gain an advantage over the other racers. Depending on the game mode and settings, a large number of items and objects can also be made use of to affect the outcome of races.

There are three main game modes in Kirby Air Ride which each offer their own unique experience. In addition, a LAN adapter can be utilized to allow up to 4 players to play on different screens using multiple copies of the game and multiple GameCubes. Otherwise, the game can be played split-screen with up to 4 players, or with CPU opponents.

All three modes feature the same simplified control scheme, in that only the control stick and the A button are required for normal play. Kirby's vehicle (referred to in-game as an "Air Ride Machine") will in most cases move forward automatically, so the control stick is used to steer, both on the ground, and in the air while Gliding. The control stick can also be used to perform a Quick Spin, which is done by quickly tapping left and right together. The A button, when held, will cause Kirby's machine to brake, which builds up power in the form of charging. When this power is at its full extent, releasing the A button causes Kirby to Boost which - depending on the machine - will cause the vehicle to instantly boost speed by a certain amount (or none at all). This is useful for handling tight corners, but not so much when racing in a straight line. There are a large variety of Air Ride Machines to choose from, and each one has its own unique method of control, along with certain advantages and drawbacks. More details on these machines can be found in the "Machines" section below.

In addition to his machine, Kirby himself has powers the player can make use of when racing. When near a suitable enemy on the course, tapping A quickly will cause Kirby to inhale it. If it was an ability-bearing foe, Kirby will gain a Copy Ability which he can use to attack his rivals or gain some other advantage. Otherwise, he will spit out the enemy as a Star Bullet which can home in on other enemies or players. Depending on the ability acquired, Kirby may gain a new way to attack his opponents, or may eschew his machine to race in an entirely new manner. However, all of these abilities are temporary, and after a predetermined amount of time, Kirby will return to his normal form. Tapping A quickly can also be used to activate Dash Panels on the ground, or to interact with other floor objects, though tapping A is not required when riding a wheeled machine.

In City Trial, it is possible for Kirby to jump off of his machine if the player holds down A, then taps down on the control stick. While on foot, Kirby can run around and jump, with his characteristic Hovering ability allowing him 5 consecutive jumps in the air before he has to come down again, similar to his limit in the Super Smash Bros. games. While off a vehicle, Kirby cannot collect items, interact with objects, or attack his foes. He will need to find a new vehicle, which he can jump onto simply by approaching it.

Kirby Air Ride has three different modes. All vary in technique and gameplay but use the same basic controls. Unlike in most other Kirby titles, there is no Story Mode to follow in any of these modes, so filling each mode's Checklist serves as the main method of progression instead. Once a Checklist is sufficiently filled, the player gains access to an "Ending" movie, signifying that they have "completed" that mode.

Air Ride is the main mode of the game, and involves straightforward racing in full 3-D environments. When first starting this game mode, players may only make use of the Warpstar - a recognizable and well-balanced racing machine good for learning the basics - but will naturally unlock more machines to race with as the Checklist is filled. Also unlockable are Meta Knight and King Dedede, who cannot make use of copy abilities but have their own distinct powers instead. There are a total of nine courses to choose from, though the final one needs to be unlocked. All courses, except for Fantasy Meadows, have 2 laps by default (in the case of Fantasy Meadows, 3), but the player can adjust the number of laps, as well as other options, using the game settings.

As might be expected, the main goal of Air Ride mode is to win the race by making the best use of Kirby and his machine's capabilities. The Checklist encourages the player to do this under varying conditions, mainly by setting time goals for each course and setting, in addition to providing some more eclectic challenges such as using a specific machine, finishing the race with a specific ability, or interacting with specific course devices. In addition to the main competitive racing mode, Air Ride also features a Time Attack and Free Run mode, which allows the player to try and optimize courses to gain the best possible time.

Top Ride is the simplest mode in the game, which - like Air Ride - revolves on racing, though this time with an overhead view and less vehicular variety. Tracks in this mode are considerably shorter and smaller than those in Air Ride, due to the overhead capability, and each consist of a simple elemental theme. Copy Abilities cannot be used in this mode, but there are items that, at regular intervals, fall on the course that can help or hinder the racers. The game can also be tweaked using different settings and has its own Checklist to fill out. 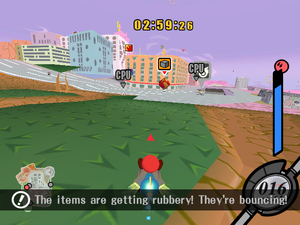 The most extensive and unorthodox mode in the game, City Trial does not focus solely on racing, unlike Air Ride and Top Ride. Instead, racers roam around in a large and open sandbox-like environment, collecting patches to power-up their machine, and then compete in the Stadium with other opponents when time runs out in the city. By default, which Stadium mode appears at the end is randomized, so racers will have to find and patch a machine that suits their particular playstyle and, with luck, will be useful in the final contest. To this end, racers can abandon their vehicles in order to find a new one better suited to their needs, though doing so exposes them to potentially have their patches stolen by rivals. As time passes in the city, events can happen at random, either hindering or helping racers' progress.

While roaming through the city, players can come across various items aside from patches which they can use to recover HP, gain a temporary bonus, or attack rivals with. Often, these items can be found inside boxes that need to be broken using a quick spin or boost, or by simply driving into them with enough force. Six of these boxes in particular can contain Legendary Machine parts which, when assembled, allows Kirby to obtain either the super-soaring Dragoon, or the nigh-indomitable Hydra. These two machines do not appear in any other game mode, and - depending on the Stadium being played - offer an enormous advantage to whoever can assemble them, so competition over the parts is often intense.

Like most Kirby games, Copy Abilities are available for Kirby's use. However, unlike most other Kirby games, all copy abilities are only temporary or single-use. They are obtained by swallowing certain enemies or, if in City Trial or in the Stadiums; Destruction Derby and Vs. King Dedede, collecting Copy Panels[1]. There are a total of eleven copy abilities in the game, as follows:

There are a total of sixteen Air Ride Machines to choose from in Kirby Air Ride, not including the machines used in Top Ride mode. In Air Ride mode, all but the Warpstar must be unlocked, in order to be used. As for City Trial, racers start out with the Compact Star and must find the vehicle they want in the city, before they can use it. The vehicles may or may not be available at times, and they can appear in different spots in the city. Racers can then hop off their current vehicle, and ride on another.

Legendary machines only appear in City Trial Mode. In the main mode, they can only be found after assembling machine parts, found in certain red boxes scattered across the city. When all 3 parts are collected, the machine automatically forms, replacing the machine Kirby is riding on. In Free Run mode, once the player has unlocked all 3 parts for each machine, Kirby can use them whenever he wants.

In Top Ride Mode, there are only two machines available that are exclusive for this mode. Other than their appearance, the two machines' only difference is their control options. Unlike the other machines, these ones do not come with in-game captions.

By default, players can choose between pink, yellow, blue, and red Kirby, though no two players can be the same color. Each game mode allows up to four additional colors to be unlocked; those being green, purple, brown, and white Kirby. These colors are unlocked separately in each game mode, and can also be applied to King Dedede and Meta Knight.

Kirby Air Ride features a moderately-sized cast of enemies, who mostly serve as fodder on race tracks or as simple obstacles. While enemies are not as central to gameplay as they are in other Kirby games, there are some unique faces here that cannot be seen in any other game. They are as follows:

Each game mode has a Checklist, which consists of 120 objectives each. Completing at least 100 is necessary to 'complete' the game mode and unlock a special movie for it, which often includes the credits.

Crossover with Kirby: Right Back at Ya![edit] 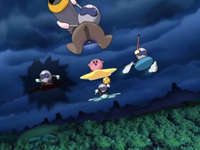 Various Air Ride Machines can be seen ridden by the eponymous "Air Riders" in the final episodes of Kirby: Right Back at Ya!.

Due to concurrent development periods, the last five episodes of the anime series Kirby: Right Back at Ya! feature elements from Kirby Air Ride, in the form of the Air Riders who pilot some of the Air Ride Machines seen in the game. These include the Winged Star, Rocket Star, Formula Star, and Shadow Star, though their performance in the anime does not quite align with the game versions. Aside from these enemies, Kirby himself also rides these machines, particularly making use of a Winged Star to traverse eNeMeE's Fortress when his own Warp Star is damaged and recovering.

Likewise, Kirby Air Ride features elements from the anime series, most notably several of its musical arrangements, which come directly from the Japanese version of the show. Great Sage Kabu from the anime also cameos as part of the background decoration in the Water course in Top Ride mode.

The following is a list of staff who have worked on Kirby Air Ride: