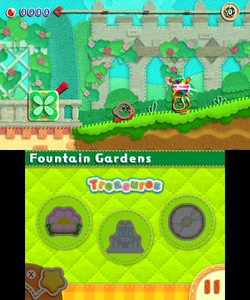 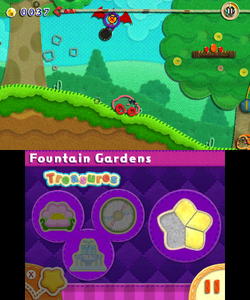 These are six hats that operate similarly to Copy Abilities, giving Kirby new ways to attack opponents. They are as follows:

55 new pieces of Furniture are available for decorating Kirby's Pad. These can be obtained by completing stages in Devilish Mode using Life Pieces.

The player can now also move and place items in Kirby's Pad with the touch screen.

Kirby can gain aesthetic hats if the player scans in a Kirby series amiibo figurine. These hats are tied to certain Ravel abilities.

Being a port, Kirby's Extra Epic Yarn features nearly all of the content of the original game, including the stages, enemies, bosses, and other features. For information on this content, see the Kirby's Epic Yarn page or the navigation box below.

There is one notable feature that does not return, however. Due to the nature of the 3DS system, local multiplayer is no longer possible. As such, Prince Fluff is no longer playable, being relegated to a support role similar to Bandana Waddle Dee in Kirby: Triple Deluxe and Kirby: Planet Robobot. He will still appear during cutscenes and in the Goal Game. He also occasionally appears in the middle of a stage to give Kirby a star bead or a ravel ability.

Kirby's Extra Epic Yarn was first announced during the Nintendo Direct on September 13th, 2018. This direct revealed the name of the game, along with announcing several of its new features, albeit briefly. More information was later posted on Nintendo's official Twitter Page.

For a brief period, the North American page for Kirby's Extra Epic Yarn erroneously stated the game to be playable exclusively on 'New Nintendo 3DS' systems. This was later corrected.

One ticked-off sorcerer just banished Kirby, warping the poor puffball to a yarn world in need of saving. The twist? Having a yarn body is epic! Kirby can transform into knitted wonders like tanks and flying saucers. Plus, his new ravel abilities mimic his classic copy abilities, adding something new to every stage of this action-adventure game! Ravel abilities allow Kirby to drop buttons like bombs or wield a wire like a sword. And that's just the beginning of all the makeshift magic. Dead end? Unzip a secret passage. Too dark? Unbutton the night to shed some light. Boss blocking your way? Unravel its face! As you play, you'll collect decorative treasures for Kirby's Pad. Show yours off with the StreetPass feature! If story mode isn't tough enough, see if you can earn more collectibles in Devilish Mode. In this harder mode, you must survive without invincibility as devils obstruct your path through each stage. There are also all-new minigames starring Meta Knight and King Dedede!

(This description was reused for the game on the My Nintendo Store.)