0² (also spelled O²[1], 02[2], and Zero2[3]) is the final boss of Kirby 64: The Crystal Shards, who inhabits the center of the final world of Dark Star and whose defeat causes the star to explode. It bears some similarities to Zero from Kirby's Dream Land 3, but it is not known if they are meant to be the same character. In order to battle 0² and obtain the true ending of the game, all of the Crystal Shards from each previous star must be collected and then Miracle Matter defeated. 0² is also faced as the last opponent in the Boss Battles mode.

0² has a halo, a pair of wings (which are dark red at the tips), and a dark red eye. It also has a bandage under its halo and a spike on its underside, which transforms into a spiky green protrusion when its halo is removed (this protrusion is also its weak point). 0² releases blood (confirmed to be such by the credits illustration of 0² and the game's ESRB rating in Kirby's Dream Collection Special Edition) when its eye is hit, though this does not actually damage the boss. Its halo and wings may suggest that 0² is a reincarnation or angelic form of Zero.

Attacking 0²'s underside once exposed is the only way to directly damage it.

0² has only two forms of attack: firing explosive orbs from its eye, and releasing green gas when its green tail is exposed. Both of these projectiles will damage Kirby on contact, though they can be easily avoided with continuous movement.

Kirby uses Ribbon's Crystal as a weapon during the battle, and Ribbon uses her wings to guide Kirby around. 0² starts off impervious to direct damage. In order to reveal its weak point, Kirby can stun it by striking its eye 30 times. While 0² is stunned, Kirby and Ribbon can attack its wings to disable them or fly to its halo and shoot it 10 times, after which it vanishes and 0² flips over revealing its spiny green tail. Kirby must deal enough damage to the tail before it retracts, repeating the battle cycle. If both of 0²'s wings are disabled, it will move much more slowly, allowing Kirby to get hits in on its halo without having to shoot its eye first. After enough damage is done to the tail, 0² is defeated, and it explodes with the Dark Star.

If the L or R buttons are pressed during the fight in the Virtual Console versions, the camera will rotate.

The boss battle theme of 0² is composed by Jun Ishikawa and titled 0² Battle. The original track can be found as Music 31 in the Sound Check mode of Kirby 64: The Crystal Shards. 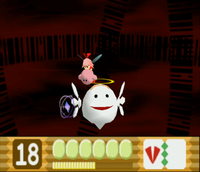