Kirby 64: The Crystal Shards is a side-scrolling platformer in the main Kirby series featuring Kirby and some of his friends, produced by HAL Laboratory and initially released in 2000 and 2001 for the Nintendo 64. It is notable for being the first installment in the series to depict Kirby and his surroundings in full 3D, although only for visual effects. Like Kirby's Dream Land 2 and Kirby's Dream Land 3 before it, Kirby 64 was not directed by Masahiro Sakurai, but instead by Shinichi Shimomura. Unlike those titles, however, Kirby 64: The Crystal Shards does not feature Animal Friends with which to combine with and alter Kirby's Copy Abilities. Instead, Kirby does this himself by combining abilities together into Power Combos. This results in 36 total unique abilities that Kirby can use in the game.

The story of Kirby 64: The Crystal Shards begins on a far-off planet called Ripple Star, which is inhabited by fairy-like beings. The inhabitants of Ripple Star are also the guardians of a powerful crystal. Shortly before the game begins, an ill-willed creature called Dark Matter attacks Ripple Star. Concerned with the crystal's safety, the Queen asks Ribbon, a young fairy, to take the crystal and escape to a safe place with it. Ribbon obeys her ruler, but as she flies off, she is pursued by Dark Matter. Eventually, the powerful being is able to assault Ribbon, which destroys the crystal and splits it into several Crystal Shards. Meanwhile, Ribbon crash-lands on Pop Star, Kirby's home planet.

Ribbon, explaining her trouble to Kirby.

It is not long before Ribbon meets Kirby, as she unintentionally uses him to break her fall. After both of them find and merge two of the Crystal Shards, Ribbon explains her misery to Kirby, who instantly agrees to help out. While they search for the missing shards on Pop Star, they manage to add a Waddle Dee, an artist girl called Adeleine, and even Kirby's arch-rival King Dedede to their cause. The group then travels to several planets to look for shards, using the crystal's transportation powers.

After traveling through several regions on numerous planets, the group finally gets the chance to travel to Ripple Star. The planet has become covered in thick, black clouds and is generally in a bad state. The Queen herself has been possessed by Dark Matter, which the group remains unaware of. Ribbon is visibly shocked to see her home planet in such a condition, but the rest of the group quickly comforts her. They then journey to Ripple Star together, where they battle their way into the palace and confront Miracle Matter, the apparent master of the Dark Matter. Kirby finally manages to defeat the foe and restore peace to the fairy planet. The Queen remains influenced by the Dark Matter, however, and after Kirby and his friends leave the planet to return home in a spaceship, the queen can be seen giving Ribbon a malicious glare.

The ending changes if Kirby and his friends manage to collect all of the Crystal Shards. If they do this successfully, the restored crystal reveals the possession of the Queen and expels the Dark Matter from her body. The remaining Dark Matter then flies off into space, where it forms a new level called Dark Star. Intending to destroy the dark threat, the group travels into the heart of Dark Star with Kirby's Warp Star. Inside the black cloud, Kirby uses the abilities of his friends for one last time. Eventually, Kirby and Ribbon engage 0², the master of Dark Matter, and an angelic version of Kirby's old enemy Zero, in a fierce battle. The two of them manage to defeat the creature with the help of the Crystal Shards, though, and Dark Matter is eliminated. To thank the heroes for their efforts, the Queen awards each of them with a piece of the crystal. In the end, Kirby receives a kiss from Ribbon. 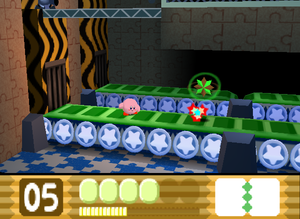 Despite the fact that Kirby 64: The Crystal Shards features full 3D graphics for the first time, the game itself still plays like a 2D sidescroller. The game makes another distinction from its predecessors, giving Kirby only seven different abilities to copy, as opposed to the vast ability pool of other games. The base abilities are Burn, Stone, Ice, Needle, Bomb, Spark, and Cutter. However, by inhaling enemies, Kirby can create ability stars, which he can spit at other enemies. If an ability star connects to another enemy with an ability, the two abilities will merge and form a Power Combo. By combining abilities, Kirby can master 28 different abilities, plus the seven base abilities, making a total of 35 abilities.

The game features six levels, or planets, each with three or four stages and one boss fight. From the beginning, only the first stage of Pop Star is available. In every stage, there are three Crystal Shards to be found. The Crystal Shards are often hidden in remote places or behind obstacles that can be destroyed only by a certain ability (usually indicated by the obstacle's color). Finding all the Crystal Shards is not necessary to complete the game, but it is essential to 100% complete the game, as finding all 74 Crystal Shards (66 from every stage, six from every boss, and two during the intro) unlocks the true ending of the game.

There are a total of seven levels. Most levels have five stages, the last of which is a boss battle. Every level's name consists of a single word, followed by "Star". Both the first and the sixth level have only four stages each, and the last one consists solely of the final boss battle.

In the Japanese version, a selectable display uses kanji instead of symbols.

These enemies do not provide any abilities when swallowed, but may have some secondary function if held above Kirby's head, if they can be inhaled at all.

These enemies will provide a copy ability if swallowed, and can combine with Ability Stars thrown at them to make Power Combos.

These enemies are found in specific locations and have higher HP than normal enemies, but are not as powerful as bosses. They cannot be inhaled. The following table lists them in the order they are encountered in-game:

Just as there are seven levels (planets), the game has seven bosses, one for each planet.

Kirby 64: The Crystal Shards has three Mini-Games that can be played outside the main adventure. Every Sub-Game has a single-player mode and a multiplayer mode involving 2-4 players. The Sub-Games have four difficulty levels, each unlocked by defeating the CPU in the previous difficulty level (meaning at most 3 human players can unlock difficulty levels together): Easy, Medium, Hard, and Intense. There are four playable characters: Kirby, Waddle Dee, Adeleine, and King Dedede, who do not differ in gameplay.

The following is a list of staff who have worked on Kirby 64: The Crystal Shards:

Kirby™ stars in his first 3D adventure, which is also his Nintendo 64™ debut.

This game finds the always-versatile hero battling a new enemy called Dark Matter. Dark Matter is after a distant land's powerful crystal, but a young fairy named Ribbon attempts to save it by escaping with the gem to Dream Land. Now the crystal has been broken, and it's scattered around the world.

Take control of Kirby, and help him journey across six worlds, battling a wide variety of enemies and challenging bosses, as he tries to collect all 100 pieces of the shattered crystal. Along the way, you'll use Kirby's trademark Copy Ability to use enemies' strengths against them. Not only that, but try combining any two abilities to create a brand-new one that is usually stronger than the original.

Throw in three exciting multiplayer minigames, and you've got a package of which even King Dedede would be proud. Fans of Kirby and action games with bright, colorful graphics should vacuum this one up.