Air Ride is one of the three game modes in Kirby Air Ride. It is the primary mode, pitting Kirby against clones of himself, as well as two familiar antagonists on elaborate 3D courses - where Kirby must choose a machine to ride, glide, boost and use copy abilities to win the race.

Controls are exceedingly simple, but difficult to master. Kirby's machine accelerates on its own, so the control stick is used to steer. Flicking the control stick left and right together causes Kirby to Quick Spin, which can damage enemies and rivals. Holding down the A button will cause Kirby to brake, and charge up energy, which can be released at max power to perform a Boost. This is useful for drifting, and taking tight turns. Most machines also have the ability to Glide, which can be done by launching from a ramp or riding off a cliff. While in the air, the control stick is used to steer. Tilting up on the stick causes Kirby to nosedive, and tilting down causes him to pull up. If Kirby's machine is angled well upon landing, Kirby will gain a small boost in speed. This does not apply to wheeled machines.

Tapping A near an enemy will allow Kirby to inhale it, which can grant him a Copy Ability if done near certain types of enemies. Kirby can use this ability to attack his foes, or gain an advantage of some kind.

The following machines (and characters) can be used in Air Ride, though aside from the Warpstar, they must all be unlocked first via the Checklist: 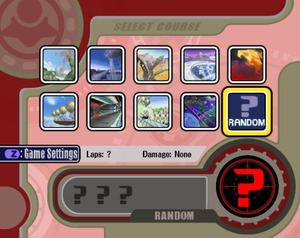 There are nine courses to play in this mode, with the last one - Nebula Belt - being locked initially. They are as follows:

There are three primary modes in Air Ride. They are as follows:

Additionally, there are a number of settings that can be changed when playing the standard Air Ride mode. These are as follows:

Like the other game modes, Air Ride has a Checklist, with 120 unique objectives to meet. Most of these revolve around meeting certain times, performing certain tasks, and racing under certain conditions or with certain machines. Most of what is unlockable from the Checklist are new machines, music tracks, and different color palettes.