Kirby Battle Royale (stylized on the box art as Kirby Battle Royale!) is an action-multiplayer spin-off Kirby series game for the Nintendo 3DS, and was the last Kirby game developed natively for the system. It released in Europe on November 3rd, 2017, in Australia on November 4th, on November 30th in Japan, and January 19th, 2018 in North America. It is the first game in the series to be localized into Dutch.

Kirby Battle Royale features multiple game modes including a battle mode featuring single-player and local multiplayer, a ranked online-multiplayer mode, a single-player story mode, and various other activities such as a training room and a collection. Core gameplay revolves around ten distinct mini-games called "Battle Modes", each one being a short, four-player activity where any participants not controlled by players are played by the CPU. These modes can be played using up to 15 Copy Abilities of Kirby along with three other characters. Some of these modes require two-on-two teams, but most have the option of a free-for-all. The game also has a demo version where a few of the battle modes and the opening of Dedede's Cake Royale can be played, though other restrictions apply.

A still from the opening cutscene, as a flyer for Dedede's Cake Royale lands on a snoozing Kirby's face.

The story of Kirby Battle Royale centers around a huge arena which King Dedede has built in an elaborate attempt to lure Kirby into a trap. With the promise of a huge cake, Kirby is indeed lured to the arena, along with Bandana Waddle Dee, who also seeks the cake. The two team up on their way to the tournament, but are ambushed by a blue Kirby lookalike, who the pink hero dispatches. Once the two reach the arena, King Dedede greets them and shows them the source of that doppelgänger, in the Kirby Printer; a strange device capable of producing endless clones of Kirby.

As Kirby progresses through the various leagues of the tournament, he and Bandana Waddle Dee must do battle with the clones, and also cross weapons with Meta Knight, who is using the tournament as an opportunity to test his strength. Dedede in the meantime is becoming frustrated with the fact that the clones are not slowing Kirby down. By the time Kirby reaches the Platinum league, the king has had quite enough and challenges Kirby to fight him in the Championship Game. Kirby and Bandana Waddle Dee, of course, manage to win this, with Dedede responding by first forcing Kirby into a 1 on 3 arena fight, then piloting a huge robot to squish him when that also fails.

Alas, even the most advanced machinery at the king's disposal is not enough to stop Kirby and his unstoppable desire for cake, and the robot is destroyed, along with the Kirby Printer. Having put on quite a show for the spectators of the games, they bring the cake to Kirby and Bandana Waddle Dee, despite Dedede's attempts to thwart this outcome.

The basic premise of Kirby Battle Royale pits Kirby against several different clones of himself in various competitive games. There are ten of these in total, though they come in several different varieties. The last five must be unlocked by paying 800 Battle Coins. The games are as follows: 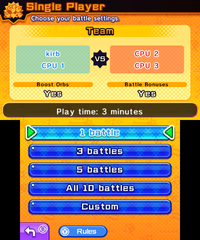 Each of these game-modes features both local and online multiplayer, making this the first entry in the Kirby series to have full online multiplayer, complete with matchmaking and a global ranking system. These games are also played in Dedede's Cake Royale, with Bandana Waddle Dee serving as Kirby's teammate. In the single-player mode, many of the games have altered rules to increase the challenge.

The following Abilities can be used in this title. Locked abilities can be unlocked by spending 500 Battle Coins, and extra characters can be made available by playing Dedede's Cake Royale:

Kirbys with many abilities charge into the Battle Arena 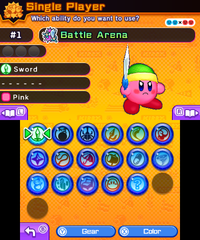 Kirby with the Fighter ability

Each ability has been reworked for a 3-D space, examples including the Ice ability being able to create icy barriers, and the Tornado ability allowing Kirby to create a torrent that tosses other Kirbys around him into the air.

Each ability and character also comes with at least three alternate hat designs (except for Mirror and Sleep, likely for being downloadable content), unlocked by spending Battle Coins. In addition, some abilities/characters have special costumes that can only be unlocked using amiibo. 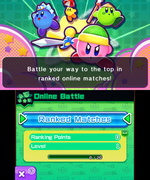 Kirby Battle Royale is the first game in the Kirby series to feature native support for online multiplayer beyond Wi-Fi. The player is asked to input a username upon starting a new save file, which will then be used as their online moniker.

The online mode consists of a ranked matchmaking system that places the player in a room with three other players. Before entering the room, the player must choose between three randomly picked battle modes, then choose their ability/character. From there, the contestant is placed in the training room until all four players are connected. Then, one of the battle modes that the players picked is chosen at random, and the game begins. Based on how well the player does, they will be awarded a certain number of points, which could cause them to go up a level. Every time the player levels up their profile, Battle Coins are awarded. As the player's level increases, however, it will become more and more time consuming to level up further.

Kirby Battle Royale has a checklist in place, which tracks various achievements the player has made. There are 60 challenges in total, and each rewards a certain number of Battle Coins when unlocked.

This is the first Kirby series game to periodically get post-release updates and minor additions to the game experience as a whole, with Kirby Star Allies being the second game to do so. Unless noted otherwise, the most recent version needs to be installed in order to play online with others and is impossible to play local wireless with others who own an older version of the game.

The default version of the game, pre-installed in physical copies of the game.

This version released on December 13, 2017 in Japan and Europe, taking 942 blocks of storage to download. The notes are as follows:

This version released on December 27, 2017 in Japan and Europe, and January 19, 2018 in North America to coincide with the North American release of the game, taking 941 blocks of storage to download. The notes are as follows:

The current version released on February 1, 2018, taking 986 blocks of storage to download. The notes are as follows: