This article is about the Waddle Dee from Kirby 64: The Crystal Shards. For Waddle Dees in a more general context, see Waddle Dee.

Waddle Dee is one of Kirby's friends and companions in Kirby 64: The Crystal Shards. He is a Waddle Dee, with no distinguishing features, headgear, or other visual cues to differentiate him from the other members of his species (other than his differently colored feet). However, he is the only Waddle Dee who appears in the game he is featured in. While not directly playable in the story mode, Waddle Dee appears in some of the stages to help Kirby, usually by giving him something to ride in, or busting holes in walls and ceilings.

Barring some unconfirmed theories, Waddle Dee has not physically appeared in any game since Kirby 64: The Crystal Shards. 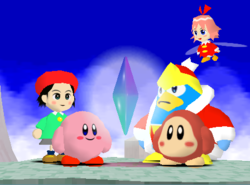 In Kirby 64: The Crystal Shards, Waddle Dee first appears in Stage 1 of Pop Star. Here, he is shown finding one of the Crystal Shards, when Dark Matter attacks and possesses him. Kirby and Ribbon find him shortly after, where he has been turned into Waddle Doo and forced to attack them. After being freed from Dark Matter's influence, Waddle Dee joins Kirby, and remains with him for the rest of their adventure.

Waddle Dee subsequently appears in every cutscene, usually depicted as mild and cautious. In the stages, Waddle Dee appears at a few key moments to help Kirby get past a certain obstacle. More often than not, this includes providing a boat, sled, or mine cart to ride through a given area. Waddle Dee can also bust holes in certain walls and ceilings, providing Kirby a way forward.

In the Sub-Games (100-Yard Hop, Bumper Crop Bump and Checkerboard Chase), players can select Waddle Dee to play as. They can also select one of four different colors for him to be. Despite the selection, he has no distinct gameplay differences from the other characters.

He was originally going to be fully playable in the main story, being able to pick up items or enemies and then throw them. However, in the final product, his playable role was greatly reduced, and he is only able to drive carts in certain stage segments.

In Kirby: Planet Robobot, Waddle Dee appears as a sticker, using artwork from the Kirby 64: The Crystal Shards instruction booklet.

In Kirby Star Allies, Waddle Dee makes an appearance in the Celebration Pictures "A Delicious Picnic" and "Chasing Our Dreams," along with the rest of Kirby's team from Kirby 64: The Crystal Shards. Notably, in both of these pictures, Waddle Dee's feet are the same flesh tone they were in Kirby 64, as opposed to being standardized to yellow like other Waddle Dees.

In Kirby's Dream Buffet, Waddle Dee appears on a Character Treat alongside Kirby, using the art of the two of them in a boat from Kirby 64: The Crystal Shards.