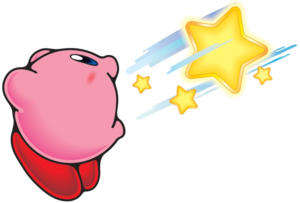 A Star Bullet (otherwise known as a Spit Star, Spitting Star, Exhaled Star or just Star in shorthand) is a glowing star-shaped projectile that Kirby can spit out after inhaling an enemy or object (notably the Drop Star left by bosses). It is his primary method of attacking at range, and deals a considerable amount of damage to anything vulnerable to it.

To launch a star bullet, Kirby must first inhale something. Instead of swallowing, the player must then press the same button used to inhale to make Kirby spit the object back out as a star. It will travel at significant speed in a straight direction until it hits something, upon which it will shatter, pass through, or be deflected, based on the power of the star, and the nature of the thing it hits.

Star bullets are capable of dealing a considerable amount of damage, more so in many cases than most Copy Ability attacks, but naturally, using them requires Kirby to inhale something first. Anything that can be inhaled can be used as a star projectile, even Kirby's friends in Kirby's Return to Dream Land and Kirby Star Allies. The trajectory of the star can be influenced by some environmental hazards or by hitting enemies at a certain angle, though this is a rare occurrence. Star bullets are also useful for clearing away blockades and hitting switches at a distance. 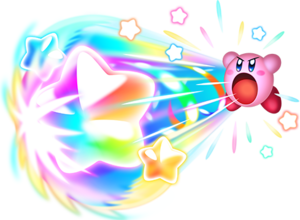 Starting from Kirby's Adventure, Kirby can swallow multiple objects at once to create a more powerful star that can pass through enemies as it hits them. This is referred to officially as ("Piercing Star Bullet") in Japanese or a Blaster Bullet in English as described in Kirby's Blowout Blast.

Prior to Kirby: Squeak Squad, the Blaster Bullet remains the same if Kirby inhales more than 2 objects. From Kirby: Squeak Squad onward, inhaling 3 or more objects makes the bullet even bigger and stronger, which is officially referred to as ビッグ ("Big Piercing Star Bullet") in Japanese.

Kirby Super Star introduced a game mechanic that a Star Bullet can do more damage if Kirby launches it while dashing. This has been featured in main series games since Kirby's Return to Dream Land, but is absent in Kirby and the Forgotten Land.

The following table lists the damage value of the Star Bullet and its variations in some Kirby games. Notably, Kirby Super Star, Kirby Super Star Ultra, Kirby's Return to Dream Land, Kirby: Triple Deluxe, Kirby: Planet Robobot and Kirby Star Allies have the same damage system. The Star Bullet's power is increased in Kirby and the Forgotten Land, possibly to match the Powered Up ability stats, and the amount of inhaled objects required to reach the maximum damage output is much lower. However, its overall damage system is largely similar to the aforementioned titles.

Star Bullets were first introduced in Kirby's Dream Land, where they were Kirby's only method of defeating most bosses. Since then, they have remained mostly unchanged throughout the Kirby series.

A few exceptions include:

In the Super Smash Bros. series, Kirby and King Dedede can inhale and shoot their opponents (or sometimes their teammates) out as star bullets, though they behave differently. They travel more slowly, always pass through enemies they hit, and the person transformed can revert back by button-mashing, or revert back normally after traveling some distance. The power of the star depends on the weight of the opponent spat out, meaning that an opponent like Jigglypuff would make for a weak star, while a fighter like Bowser would make for a very strong star.