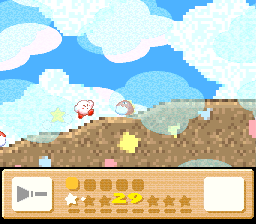 Kirby taking damage in a stage in Cloudy Park, in Kirby's Dream Land 3.
The familiar jingle "Done In" that plays when Kirby loses a life (Kirby Star Allies version).

Damage refers to the state of being affected in a way that causes loss of Health. In the context of the Kirby series, it defines how much stamina Kirby, another playable character, or an enemy loses when they are hit by something. Damage can also refer to the state of being hit, wherein the subject may recoil with a hurt expression, whether that causes actual stamina loss or not.

The following is a simplified list of every form of damage that Kirby or another playable character can take in the main series: 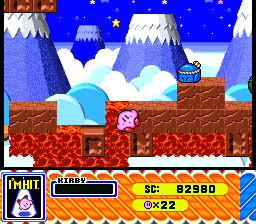 Kirby is defeated if he takes too much damage, in this case from touching a magma block.

Under most circumstances, an entity capable of taking damage will do so when it comes into contact with an area of attack (technically referred to as a hit-box) that is being generated by another entity. Most enemies, for instance, automatically have an area surrounding their bodies, which will harm Kirby if he gets too close to them without performing some kind of defensive action. When Kirby or another entity perform an attack, they temporarily generate a new hit-box that usually extends from their default body shape, allowing them to hit another entity without being hit in return. Most attacks or other forms of damage in the Kirby series are set to specific values, meaning they will do the same amount of damage every time.

In addition to this, performing certain moves, or even attacks, will cause Kirby or another entity to temporarily gain invulnerability to most hit-boxes - an example being the Burning fireball attack, which leaves Kirby immune to most forms of damage while he is executing it. Picking up an Invincible Candy will cause Kirby to completely ignore sources of damage for a short time.

When Kirby takes damage, he is often knocked back, causing the player to lose control of him for a short while. How far he is knocked back and how long control is lost depends on the nature of the attack. Bumping into a Waddle Dee for instance, will only knock Kirby back a short distance, while an explosion from a Bomber might send him flying, and leave him down for long enough to fall into a bottomless pit before the player can save the situation. The severity of the attack is also a factor in whether or not Kirby loses his Copy Ability when hit. Kirby can mitigate most forms of damage by using a Guard. Doing this successfully will stop Kirby from being knocked back, and at the very least reduce damage taken.

After being hit, Kirby will be given a short time where he is invulnerable, allowing him to escape a dangerous situation before he is hit again.

When Kirby takes too much damage and runs out of stamina, he tumbles down off the screen or in Kirby 64: The Crystal Shards, Kirby and the Forgotten Land, the Team Kirby Clash and the Kirby Fighters series, collapse on the ground losing a life in the process. In most games that feature a lives system, if the player has no extra lives left when this happens, a Game Over occurs.

Starting with Kirby: Triple Deluxe, it is also possible for Kirby to be knocked off the stage, either hitting the screen, or being knocked into the background. Assuming he has any HP left, Kirby will then reappear on the stage, roughly in the spot where he was knocked away. Kirby is also given the ability to Dodge in addition to Guarding, which temporarily gives him invulnerability.

When an enemy takes damage, they may be knocked back temporarily. Most Mid-Bosses and Bosses are not interrupted while taking damage, unless hit by something particularly strong, or damaged enough to cause a new phase in their attack patterns to begin.

Some enemies are invulnerable, which means they do not take damage at all, and can only be destroyed if they are crushed or fall into a bottomless pit. Gordos and Shotzos are the most prevalent examples of these.

One thing that makes Kirby unique is his Inhale, which is not an attack in the traditional sense, as it doesn't actually deal damage. Instead it automatically bypasses the stamina of most enemies, by turning them into objects that are swallowed or spat back out as Star Bullets. No other entity in the series is capable of doing this in turn to Kirby, with other inhales merely being a prelude to that enemy spitting Kirby back out or chewing on him to do him harm.