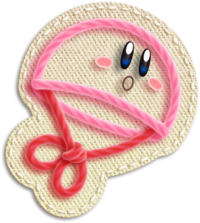 Parachute is a simple yarn transformation in Kirby's Epic Yarn and its Nintendo 3DS port, Kirby's Extra Epic Yarn. It replaces Kirby's tradition of simply floating upwards, due to being made of string. The player can activate the move by pressing 2 (or the A button on the 3DS), though it only works while Kirby or Prince Fluff are in midair. Either character falls slower while being a parachute, and their air mobility is improved. The parachute can get caught in wind currents, which push it in the direction it is blowing.

Kirby and Prince Fluff are never damaged after performing the ability, so Parachute merely exists an option that may lead to rewards, such as beads. The player can press 2 again to cancel the move.

Parachute is one of the only two transformations that can be used in midair, the other being the Weight form.