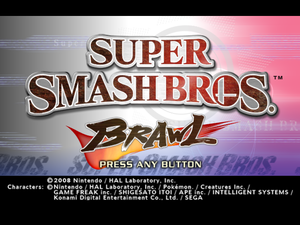 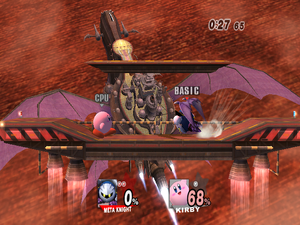 Super Smash Bros. Brawl (often referred to in shorthand as simply Brawl) is a fighting game for the Wii and the third game in the Super Smash Bros. series. Like the other games in the series, it is a cross-over between various video game franchises and involves three playable characters from the Kirby series in a side-scrolling platformer-fighting game where the goal is to knock opponents off the stage.

Super Smash Bros. Brawl features 35 playable characters, not including transformations, keeping all but four characters from the previous game and adding many newcomers. The playable fighters are as follows: 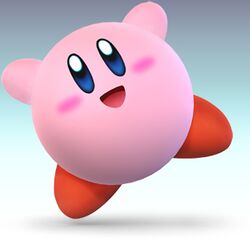 Kirby is one of the starter characters in this game. He is notable for his small stature, light weight, and multiple mid-air jumps. His versatility makes him good for beginners, and he can copy the neutral special moves of all the other fighters.

Most of Kirby's attacks come from his appearance in Melee, with many of those based on moves from the Kirby series, though some have changed between Melee and Brawl. Kirby's attacks are as follows:

Kirby becomes Cook Kirby, dons his hat, and pulls out a cooking pot. All nearby fighters and items are pulled in, simmered for a time, then launched out, creating Food items in the process.

Kirby is defined by his small stature, his versatility, and his floaty nature, along with his multiple mid-air jumps. These attributes make him a good character for beginners to pick up, as his standard attacks are easy to understand and his jumps allow him to recover easier if he is knocked off the stage. Kirby's attacks are all useful in their own way, and in certain circumstances, he can rack up a good amount of damage using basic combo strings. His Inhale also allows him to mix up his fighting style by copying other members of the cast.

However, Kirby's small size makes him easy to launch, and his slow movement speed makes him vulnerable to characters who can outpace him and pick him off from a distance. His attacks are also often outmatched by other characters who have larger and quicker strikes, or who may use his floatiness to keep him from landing after being hit upward. While Kirby can recover from almost any distance when launched, he will have difficulty returning to the stage if a persistent opponent tries to guard the edge or strike him while off-stage. 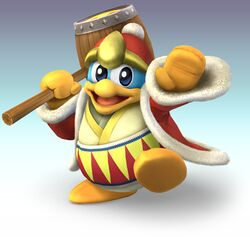 King Dedede is one of the starter characters in this game, making his first appearance as a fighter here. He is a very heavy fighter, with slow but strong attacks and a powerful grab-game. Despite his size, King Dedede has a very high recovery, with 4 mid-air jumps and his Super Dedede Jump to pick up the slack.

King Dedede calls his army of Waddle Dees and other baddies, then he starts dancing while they storm the stage, damaging any enemy fighters they touch.

King Dedede has very powerful moves, good recovery in his four jumps, which, when coupled with Super Dedede Jump, provides him one of the least punishable recoveries in the game. In addition to that, Dedede has many options for scoring KOs, with his good range on his attacks, particularly his side tilt, and he has an amazing grab game, which can effectively reduce two-thirds of the cast's stocks quickly due to his down throw's set knockback. However, he lacks speed compared to other fighters, as his aerial movement is low and his dashing speed is the third slowest in-game. He also is vulnerable to chain throws and combos himself due to his high weight and falling speed. However, his pros overshadow most of his cons. 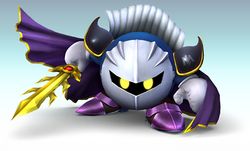 Meta Knight is one of the starter characters in this game. He is characterized by his unrivaled mobility and the quickness of his attacks, making him a very formidable fighter. His recovery is the best in the game, with 5 mid-air jumps and a recovery move that allows him to glide further still. His other special moves also allow him to recover, in one form or another.

Known as Galaxia Darkness, Meta Knight pulls out his cape and throws it over his opponent. If he connects with this, the screen goes dark a moment, then Meta Knight makes a huge slash, sending his opponent, and any other bystanders flying.

Meta Knight is widely viewed as the best fighter in Brawl due to his unmatched aerial mobility, his quick and far-reaching attacks, and his overpowering special moves. In the hands of a capable player, Meta Knight can avoid ground-based confrontations altogether, and characters who are slow or have limited aerial movement will have very little to say about it. All four of Meta Knight's special moves allow him to recover in some form or another, giving the masked swordsman more recovery options than anyone else in the cast, on top of his already excellent aerial speed and his five mid-air jumps.

To counterbalance his mobility and speed, Meta Knight is one of the lighter characters in the game and his attacks are not typically the strongest in terms of knockback or damage. However, due to the aforementioned strengths, this is almost never an issue for him, since his only real goal is to knock his opponent off the stage with several quick attacks and then keep them from returning by going after them off-stage. Slower characters - particularly those like Ganondorf and Bowser - will be more-or-less unable to counter this type of play from Meta Knight.

Brawl features 46 stages - some of which are carry-overs from Melee. They are as follows:

In addition, the player has the option of building custom stages using pre-determined pieces.

There are two stages based on Kirby games. They are the Halberd and Green Greens.

The Halberd is, naturally, a stage that takes place on and around the Battleship Halberd from Kirby Super Star. The stage begins in a docking area, then takes place on a floating platform that follows the Halberd about. Then it docks on the deck of the Halberd, where the fighters can be subject to the attacks of the Combo Cannon. This includes the giant main laser gun, bombs that fall from the top of the screen, and an extending arm that might strike a random fighter. One of the music tracks that can play on this stage is a heavy metal remix of the Gourmet Race theme, from Kirby Super Star.

Green Greens is a stage based on Kirby's Dream Land which features Whispy Woods, and two columns of falling Star Blocks with the occasional Bomb Blocks. Whispy acts as an obstacle by blowing at the characters, and dropping apples onto the stage once in a while. The background of the stage has what appears to be an ocean with star-shaped islands, and a rainbow behind the stage. The music is an arrangement of "Green Greens" from Kirby's Dream Land, and "Kirby's Triumphant Return," played at the end of Milky Way Wishes in Kirby Super Star.

This special adventure mode can be played with one or two players. It has a self-contained story that features likenesses of the fighters, though in actuality they are animated trophies that inherit personality traits from the characters they are based on. All three Kirby series fighters play a major role in the plot, with King Dedede in particular being instrumental in the success of the heroes against the main villain. The Halberd also plays a major role, being the ship that the Subspace Army uses to spread its minions about the place. Meta Knight spends most of the story pursuing, then recapturing his flagship, before steering it into certain doom in the last assault. It is also during this assault, that Kirby flies his Dragoon through the main Subspace Gunship, crippling it.

Gameplay-wise, The Subspace Emissary is very similar to a typical Kirby game, most prominently Kirby Super Star. It has its fighters traversing many levels of varying platforming areas, separated into sections with doors, fighting enemies that will reappear once off-stage and fighting bosses that attack in various patterns and do not flinch.

Many items from the Kirby series can appear during standard gameplay. These include:

In addition, Knuckle Joe may appear from an assist trophy. He will jump about, and attempt to pummel any enemy fighter he encounters. His Rising Break is very deadly.

Among the collectable trophies in Brawl, there are several depicting characters and objects from the Kirby series. These include:

Super Smash Bros. Brawl introduced Masterpieces, a game mode that allowed gamers to play past games for small amounts of time. Included from the Kirby series was Kirby's Adventure.

Many elements in Brawl would go on to influence future Kirby titles. The following details would eventually find their way into the Kirby series: