Super Smash Bros. Ultimate features every fighter from all older games in the series, including those who appeared only in one title prior.

The game features a total of 86 fighters (Pokémon Trainer and Pyra & Mythra count as two total; number includes Echo Fighters), out of which 23 are newcomers to the series.

Despite the massive roster, a new game starts the player off with only the eight starting fighters from the original Super Smash Bros., with the rest being unlockable or downloadable. However, the unlocking conditions are easier and faster compared to previous games. 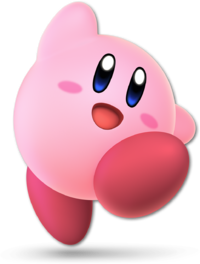 Kirby returns as a series veteran. Being part of the 'Perfect Attendance Crew', Kirby is among the starting eight fighters who do not need to be unlocked first. In addition, Kirby is also the first character available in the Adventure Mode - World of Light, as he was the only one to survive Galeem's initial attack.

Kirby retains his essential attributes from for 3DS/Wii U as a lightweight and versatile fighter with 6 jumps and the ability to copy the moves of his opponents, although some of his moves and physics were changed. Despite this, he is the only fighter from his series who did not have his Final Smash changed, once again using the Ultra Sword.

Most of Kirby's attacks were retained from his appearance in for 3DS/Wii U with few tweaks, most of which were to his attributes and frame data. The following lists off each of Kirby's moves: 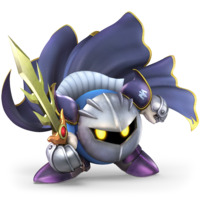 Meta Knight returns in this title, as an unlockable fighter. Some of his color changes resemble Galacta Knight and Dark Meta Knight. Like his previous incarnation, he is a highly mobile aerial fighter with 6 jumps and special moves which can all assist further in his recovery. He gains a new Final Smash in this title known as Darkness Illusion.

All of Meta Knight's special moves leave him helpless after use. 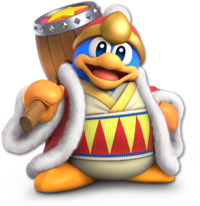 King Dedede returns in this title, as an unlockable fighter. His moveset appears relatively unchanged, but he now has the ability to inhale his Gordos after tossing them, then spit them back out again. Like Kirby in Ultimate, Dedede can inhale and spit opponent's projectiles.

King Dedede's old Final Smash, Dedede Burst, has been replaced by a new Final Smash called Dede-Rush, now involving tossing one opponent into a boxing ring, then attacking them as Masked Dedede.

King Dedede inhaling a Bob-omb (not a good idea)

Super Smash Bros. Ultimate has 115 stages, over 90 of which are returning ones from previous titles. See all stages on the official website list.

All stages are available from the beginning. In addition, all stages have a Battlefield form (Battlefield-like layout) and Ω form (Final Destination-like layout).

New to the series is a stage option called Stage Morph. When this is enabled, two stages can be selected together, and they will automatically switch midbattle after a certain amount of time.

All Kirby series stages from older titles have returned. These include the following in chronological order:

In this title, stages of a series can play all music tracks from the same series.

The Kirby series has 38 music tracks: 32 available at the start and 6 unlockable. (The five Kirby's Dream Land tracks are now counted as a single Kirby Retro Medley.) All of these tracks can be played on Battlefield, Big Battlefield, Small Battlefield, Final Destination, Dream Land (64), Green Greens, Halberd, Dream Land GB and The Great Cave Offensive. The following lists every Kirby music track:

A number of Kirby series items appear in this title. These are as follows:

Spirits is the new mode in Super Smash Bros. Ultimate. In this mode, the player can collect spirits in the form of their official illustrations and use them in Spirit Battles.

Spirits can be equipped to a fighter, which function like stickers in Brawl. Spirits also replace the collectible trophies in previous titles. Spirits can be obtained in various ways, including Classic Mode, Adventure Mode, Spirit Board, Summon, Challenge rewards, and Vault's Shop.

There are four kinds of spirits: primary, support, fighter and master. Their strength and rarity are ranked from low to high: Novice (1 star), Advanced (2 stars), Ace (3 Stars) and Legend (4 Stars).

When the player starts a new save file of Super Smash Bros. Ultimate, a random Advanced primary spirit will be given.

The Adventure Mode of this title is called World of Light, and can be played by only one player. In this mode, all characters in the Super Smash Bros. universe, except Kirby, have lost their bodies and been turned into spirits by Galeem, Lord of Light. The player starts the game with Kirby and saves the spirits and the world.

A feature exclusive to World of Light is the Skill Tree, which can give fighters additional skills by investing Skill Spheres. While most of the spirits in the game are fought in World of Light, there are a few which are absent in it and can only be obtained via Spirit Board, Summon, etc.

Spirit Board is a mode to obtain spirits outside of the Adventure Mode. It has a Target List with up to 10 random targets. Each target requires the player to defeat a fighter possessed by a spirit, with special rules like the Event matches in previous titles.

Each target has a timer of 5 minutes to accept (except Legend spirits with 15 minutes), and when the time is over, they will be replaced by new random targets. When a target is finished, there will be a timer for respawning as well. There are items that can reshuffle or fill the targets.