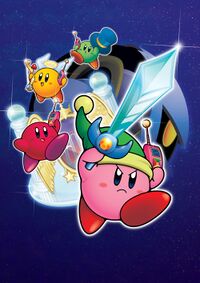 Four different hues of Kirby from Kirby & The Amazing Mirror and Meta Knight, a suspected member of Kirby's species.

Kirby is not the only one of his kind in his universe. Many Kirbys have appeared throughout the series, and outside of the series too. The following will list other examples of Kirby's species (referred to as 'Kirbys' for the sake of simplicity), both confirmed and suspected:

Naturally, the most notable member of Kirby's species is Kirby himself.

Naturally, Kirby himself is the most notable of his species, and is typically seen as its representative. Despite all of the examples of Kirby clones illustrated below, Kirby is often depicted as the only one of his kind in games that he appears in, with most examples of additional Kirbys being directly derived from him in some way. Given that Kirby did not originate from Dream Land itself, but made his home there after he "blew into Dream Land one day on a spring breeze",[1] it is possible that there are others like him elsewhere on Planet Popstar or the galaxy at large, but these have yet to be seen/confirmed.

The Kirby series has a habit of splitting Kirby into several copies, whether it just be for visual effect, or as part of the story.

The Kirby series has a habit of cloning Kirby regularly in various ways. The most basic example is when Kirby splits into multiple copies of himself in order to perform his victory dance at the end of levels and stages. This trope goes all the way back to the original Kirby's Dream Land, though it is not clear if these dance clones are meant to be distinct entities or if they are just a visual effect as part of the dance. These clones are produced just ahead of the dance and do not persist after the level or stage fades out. Other examples of such ephemeral Kirby clones include the Kirbys operating the Goal Game cannon in Dyna Blade from Kirby Super Star, the Kirbys that come pouring out of the cloud in the opening cut-scene for Bubbly Clouds from Kirby's Dream Land, and instances of splitting Kirby into multiple copies for gameplay purposes, such as in Kirby's Block Ball, Kirby Mass Attack, and Kirby and the Rainbow Curse.

There are of course examples of more persistent and distinct clones of Kirby who operate separately from him and are often distinguished by body color. The first canonical instance of this (i.e. not counting simple palette swaps for multiplayer modes, detailed below) is in Kirby & The Amazing Mirror, where Dark Meta Knight strikes Kirby with his sword and splits him into four clones, each with a different color. Aside from this superficial difference, each Kirby has the same abilities and presumably the same motives. Differently-colored clones of Kirby also appear in the Kirby Clash games as part of Team Kirby. In Kirby Battle Royale, King Dedede is in possession of a Kirby Printer which is capable of mass-producing Kirby clones (which come in every color except for pink). These clones come pre-equipped with a Copy Ability, and never discard them. When the Kirby Printer is eventually destroyed, all the clones it created vanish.

Keeby (left) and Shadow Kirby (right) are the only two examples of Kirby lookalikes who have distinct names and identities.

The player 2 character in Kirby's Dream Course is a yellow version of Kirby officially known as Keeby. In the game, he serves as player 2, competing against Kirby. Like Kirby, he is able to copy abilities from enemies, though it is unknown whether he can float or inhale. As he has never been seen or mentioned again in the series, it is likely that this Kirby is not canon, though he is notable as the first example of a differently-colored clone of Kirby to appear in the series' history.

Shadow Kirby is a gray/black and/or purple version of Kirby that appears in Kirby & The Amazing Mirror and the Kirby Fighters games. He appears to share the ability to copy and hover, and his motives are not entirely clear. Unlike the other clones of Kirby, his personality differs notably: he is mischievous, reclusive, and somewhat cowardly, though he does not appear to be evil at heart.

Kirby along with three common other colors of Kirby.

At the end of Kirby's Dream Land, Kirby appears before what looks to be a crowd of other Kirby-like entities.

In most Kirby spinoff games and Sub-Game that involve multiplayer, players 2-4 can play as alternately colored Kirbys. Notable standalone games that include the ability to play as such include Kirby 64: The Crystal Shards, Kirby: Nightmare in Dream Land, Kirby Air Ride, Kirby: Squeak Squad, Kirby Super Star Ultra, Kirby's Return to Dream Land, Kirby: Triple Deluxe, Kirby Fighters Deluxe, Kirby: Planet Robobot, Kirby Star Allies, and Kirby Fighters 2. These Kirbys, however, are not officially canon to their respective games' storylines (if there are storylines in the first place).

At the end of Kirby's Dream Land, Kirby can be seen returning stolen food to a crowd of other round creatures that look a lot like him. In Spring Breeze, however, this crowd was retconned into one made mainly of Waddle Dees.

Meta Knight is often seen as the same species as Kirby, due to their similar body shape and faces. However, Meta Knight has never been shown to have Kirby's other distinct powers, such as the ability to inhale and copy abilities.

It is popularly speculated and widely believed that Meta Knight and Kirby are the same species. Evidence pointing in favor of this conclusion includes their similar shape, body structure, and face (when unmasked). Additionally, the anime explains that both Kirby and Meta Knight are part of an order of Star Warriors who tend to share a similar origin (though even if taken into consideration, this reasoning is imprecise, as Star Warriors themselves also tend to come in different types), although the anime is a different canon from the games.

However, a number of key differences exist between Kirby and Meta Knight, many of which were established in later titles. Meta Knight is often depicted with wings, which is a feature that Kirby cannot obtain without the use of the Wing ability. However, in the Super Smash Bros. games, these wings are shown to be a transformation of his cape, which eventually was demonstrated in the Kirby series proper in the opening cut-scene of Kirby: Planet Robobot. Meta Knight also has glowing yellow (but otherwise featureless) eyes, which is another trait that Kirby lacks. As a final note, Meta Knight has never been shown to be able to inhale, which is something that Kirby and all of his clones are capable of doing.

Ultimately, there is no conclusive proof in either direction, but the fan consensus still tends to tip toward Meta Knight and Kirby being the same species. This is augmented by the way Meta Knight is often compared to Kirby in the games and in descriptions, with examples including both the eighth palette swap of Kirby and his description in Palutena's Guidance in Super Smash Bros. for Nintendo 3DS / Wii U and onward.

Dark Meta Knight (left) and Galacta Knight (right) are similar in character to Meta Knight, and thus, are also similar to Kirby.

Only seen for a brief moment after he is defeated at Radish Ruins in Kirby & The Amazing Mirror, Dark Meta Knight's unmasked form resembles a black Kirby, darker than even Shadow Kirby. However, it is unknown whether he is an actual evil Kirby working for Dark Mind or merely a replica of Meta Knight created by Dark Mind.

Galacta Knight in many ways resembles Meta Knight and therefore Kirby in shape and size. However, Galacta Knight's maskless form is never seen, even when he is defeated. In addition, his wings appear to be a natural fixture, rather than the cloak that comprises Meta Knight's.

Prince Fluff and Kirby are nearly identical in shape and ability when in Patch Land, but unlike Kirby, Fluff retains his yarn form when in Dream Land after Yin-Yarn's spell is broken.

In Kirby's Epic Yarn and Kirby's Extra Epic Yarn, Kirby's primary helper is Prince Fluff, who, like Kirby in his yarn state, is unable to inhale or hover, but is capable of transforming himself into other shapes. It is unclear if Fluff is the same species as Kirby, or if they just happened to look similar when Kirby was transformed into a yarn outline like him. However, one notable difference between the two is that Prince Fluff has large, wide eyes, whereas Kirby's eyes are beady.

Batamon looks superficially similar to Kirby, but has a different face and none of his powers.

In Kirby's Dream Land 3, mysterious enemies known as "Batamon" are often seen in locations impossible for Kirby to access. These enemies look very similar to Kirby, but bear a slightly different body shape and face structure.