Dedede's Cake Royale (also called The Cake Royale and Dedede Grand Prix) is the main story mode of Kirby Battle Royale. It is played solo, and features Kirby and Bandana Waddle Dee competing for a prize cake, in a tournament set up by King Dedede.

When the player boots up the game for the first time, it begins with the introduction cut-scene and first moments of the story mode, before leading into the main menu.

The story begins, as many do, with Kirby sleeping under a tree in a grassy field. A loose piece of paper comes fluttering down from the sky, and lands on Kirby's face, stirring him. He has a look at the paper, and becomes quite excited, readying his sword and running off. At this point, the player sees what was on the paper, revealing itself to be a promotional flyer for a tournament, where the reward is a gigantic cake. As Kirby makes his way toward the site of the tournament, he runs into Bandana Waddle Dee, who has collapsed on the ground. Bandana Waddle Dee had also been traveling to the arena for the cake, but had 'walked all night', and was exhausted. Kirby helps Bandana Waddle Dee by carrying him through the forest, until they run into a dead end, where they both get ambushed by Bronto Burts. After they defeat these pests, a blue clone of Kirby appears from the bush, and attacks without warning. After Kirby defeats this mysterious foe, a Warp Star appears from the sky to carry Kirby and Bandana Waddle Dee the rest of the way to the arena. Once they arrive at the entrance, Bandana Waddle Dee regains his energy, and they both walk to the gate, guarded by a Soldier Waddle Dee. The guard challenges Kirby to a game of Apple Scramble in order to qualify for entrance. With this first trial cleared, Kirby and Bandana Waddle Dee are permitted entry to the arena proper, and a cut-scene is displayed to the player showing the sorts of battles that lay ahead. This marks the end of the intro.

The story proper begins as Kirby and Bandana Waddle Dee arrive in the arena, where King Dedede shows them his newest contraption - the Kirby Printer. It is capable of creating copies of Kirby, pre-equipped with a Copy Ability, using only crank power. Dedede's plan is thus to pit Kirby against these clones in various games, confident that they will beat each other senseless over the cake. Meanwhile, Meta Knight looks on from atop a tower, content to observe for the moment. As Kirby advances through the leagues, King Dedede becomes increasingly frustrated, as he had intended for Kirby to lose the games and look a fool. He uses the Kirby Printer to print Kirbys with ever more elaborate abilities in an attempt to stop his pink rival from winning more games. As Kirby and Bandana Waddle Dee enter the Gold League, Meta Knight reveals himself, making it known that he is also competing in the games, and intends to challenge Kirby, noting that the clones are not up to snuff. After Kirby defeats Meta Knight in the Platinum League Qualifiers, King Dedede loses the rest of his patience, and storms out of the throne room, intent on dealing with Kirby himself.

At the Championship Match, Dedede reveals himself as Kirby's last opponent. Kirby and Bandana Waddle Dee face off against him in four rounds, but when he's beaten he stubbornly refuses to admit defeat. He forces Kirby to fight him and two of his guards alone, in a 1v3 match. Kirby manages to beat him again, prompting Dedede to retreat into his throne room, as Kirby makes chase. There, he rides an elevator up to a large chamber, where King Dedede has prepared a giant robot, the Dededestroyer Z, complete with the Kirby Printer as its base. Kirby has to battle this robot, along with the Kirbys it produces, though he gains some aid from Bandana Waddle Dee, who tosses him a cannon to fire at the robot with. With the Dededestroyer Z reduced to scrap, King Dedede is finally defeated, and the Kirby Printer is destroyed, causing all the Kirby clones it produced to vanish. A crowd gathers to cheer for the heroes as the cake is brought in for them to enjoy. 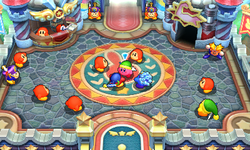 All battles can be accessed from the main lobby area in Dedede's Cake Royale. This area also features characters that Kirby can talk to.

An intro level starts before the main menu can be accessed for the first time. It teaches the player the basics of gameplay, pits Kirby against a few minor foes and a clone of himself, and then introduces the first game, Apple Scramble. This intro sequence is also available to the player in the demo version.

The main story mode involves five distinct leagues, or levels of difficulty. These are 'Beginner's', 'Bronze', 'Silver', 'Gold' and 'Platinum'. Kirby is placed in the Beginner's League to start with, and has to win enough games in that league to progress to the next one. Kirby cannot win points from the same battle more than once, so he will have to play in several different matches to advance. Whenever Kirby is in need of a teammate in a particular battle, Bandana Waddle Dee will fill that role. At first, Kirby will only be able to use the Sword ability, but other abilities will be unlocked as the game progresses.

The following is an overview of each league, and the games within:

Completion of this battle is required to qualify for Beginner's League:

100 League Points (LP) are necessary to qualify for Bronze League. The games are as follows:

There are two unlockable bonuses in this league:

150 League Points (LP) are necessary to qualify for Silver League. The games are as follows:

200 League Points (LP) are necessary to qualify for Gold League. The games are as follows:

300 League Points (LP) are necessary to qualify for Platinum League. The games are as follows:

Once Kirby enters this league, Boost Orbs become available for use in the Cake Royale. The first match is effectively a demonstration of how boost orbs can be used.

500 League Points (LP) are necessary to reach the Championship Battle. The games are as follows:

There are six unlockable bonuses in this league: