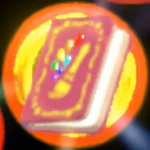 A page of the Secret Diary from the Goal Game in Kirby and the Rainbow Curse.

The Secret Diary is a collection of journal entries written and illustrated by Elline, which can be collected and read in Kirby and the Rainbow Curse. In these pages, Elline explains the backstory for the game, as well as providing information about herself and various other characters. The diary also contains more lighthearted and childish illustrations, which helps the reader to better understand Elline's temperament.

Each stage in Kirby and the Rainbow Curse has a corresponding entry of the Secret Diary, which can be collected from the Goal Game at the end. Collecting every page of the Secret Diary is required to access Challenge 39, and thus to attain 100% completion of the game.