Kirby Fighters Deluxe is a Kirby spin-off game for the Nintendo 3DS. It is a stand-alone, upgraded version of Kirby Fighters, a Sub-Game in Kirby: Triple Deluxe. The premise of the game centers around Kirbys of differing colors battling each-other using various Copy Abilities at distinct locations from the Kirby series in a fighting game format. Using their distinct Copy Ability attacks as well as utilizing various items, the goal is to be the last Kirby (or team of Kirbys) standing.

Kirby Fighters Deluxe has 12 usable Copy Abilities in all, carrying over the original 10 abilities from the original Kirby Fighters, as well as adding two extra abilities: Beetle & Bell, which can be unlocked if the player has StreetPass data for Kirby: Triple Deluxe.

There are a total of twelve stages that players can select from to battle on, based on locations from various Kirby games. Six stages are carried over from the original Kirby Fighters, with six new ones added, including one stage that requires StreetPass data for Kirby: Triple Deluxe.

All items are carried over from the original Kirby Fighters, with the addition of one new item exclusive to Team Battles.

The following lists the possible stages to appear in each round of Single Player Mode.

The final battle is against King Dedede and his group of clones made by the Star Rod Hammer Dedede Custom at the Fountain of Dreams. First, the player has to battle all of the Mini Dededes, who after jumping in from the background, are defeated in one hit, so they don't pose much of a threat. After that, Dedede and his two orange Combo Dededes appear to battle Kirby. Once the Combo Dededes are defeated, King Dedede grows over twice his normal size and attacks Kirby. Once he is defeated, the player unlocks a rare outfit for their current copy ability (if they don't already have it).

While almost all content from Kirby Fighters is carried over into this version, new features and stages have been added, which are listed as follows:

Six new stages are added to the original set from Kirby Fighters, bringing the total number for this game to twelve:

Two new Copy Abilities are added to the default roster of 10 abilities from Kirby Fighters, provided that the player has StreetPass data for Kirby: Triple Deluxe, bringing the total number of abilities in the game to twelve.

Major changes to the gameplay of Kirby Fighters Deluxe include:

Team Battles are introduced in Single Player, Multiplayer, and Training modes. Team Battles can have teams of two or three Kirbys. Kirbys on the same team can perform Face-to-Face to share recovery food with their partners just like in the main series.

Official screenshot from a Miiverse post, showing a team of Kirbys using the Team Cannon to fire at their opponent

A special item exclusive to Team Battles called Team Cannon is also introduced, which resembles the Combo Cannon from Kirby Super Star. At least two Kirbys on the same team are required to charge the cannon and use its powerful laser beam attack.

All alternate colors for Kirby from Kirby Fighters are carried over to the game, and new unlockable aesthetics are added as follows:

Costumes called Rare Outfits are added for each Copy Ability. Rare Outfits are unlocked when completing Single Player Mode on any difficulty with the respective ability. They can be selected by pressing X in the ability menu.

When any Rare Outfits are unlocked, they may also appear on CPU Kirbys. Rare Outfits don't change any aspects of the ability in core gameplay such as Kirby's health and character/attack hitboxes. Some Rare Outfits may change the sounds in addition to changing how each ability looks.

While Shadow Kirby no longer appears as a boss in Single Player Mode (being replaced by Team DDD), he is unlockable as an alternate color for Kirby, provided that the player has beaten Single Player on Very Hard difficulty at least once with any ability.

The following is a list of staff who have worked on Kirby Fighters Deluxe: 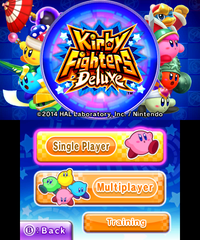 King Dedede making a cameo appearance on the title screen.