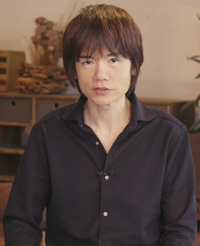 Masahiro Sakurai (桜井政博 Sakurai Masahiro, born August 3, 1970) is a Japanese video game designer and creator of the character Kirby and the Kirby series, as well as the Super Smash Bros. series. After working for HAL Laboratory from 1989 to 2003, he founded Sora Ltd. in 2005, and is currently its Director of Software Development.

Kirby series (as Director and Game Designer, except where noted)[edit]